I started out my three day weekend with making seven more tote bags from some more fabric I found in my fabric storage room.  I have enough to make five or six more. 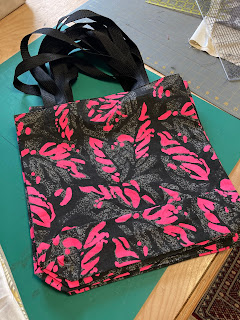 Our next gig isn't until July 10th so I have plenty of time to make more. I only ended up using two for the show Friday night. The show went well despite the problem the band had with the monitors. It was hot and muggy which took the wind out of my sail the rest of the weekend. Here is the merch booth all set up and the band on stage. 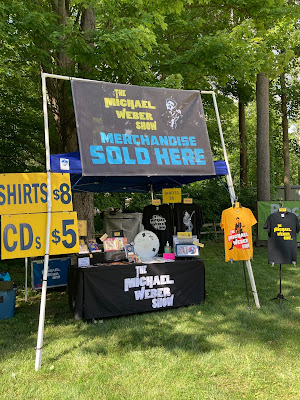 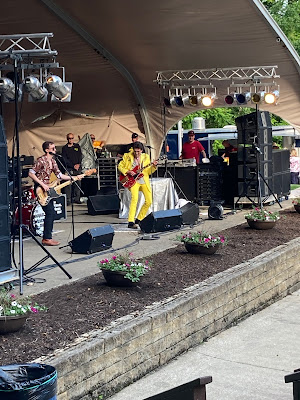 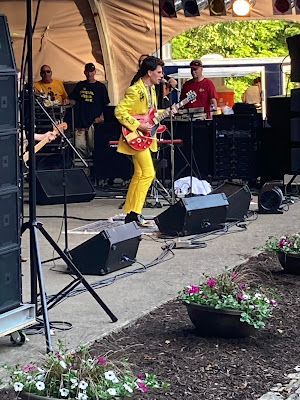 Saturday I worked on the Xmas stocking, ran errands and went to an estate sale that right up the street. Here is where I was on the stocking and where I am now. I got lots of outlining done. I had an hour and a half to stitch while I waited at the merch booth before the doors opened so I got most of the runners on the horse outlined then. 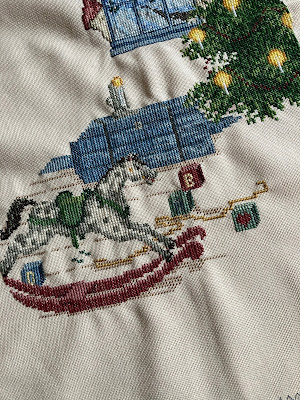 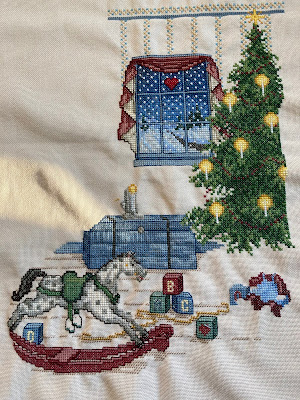 I stopped at the estate sale on the way back from the grocery store. They were selling stuff so cheap. I got some Ohio State Xmas ornaments - these will go to my brother. $1 each 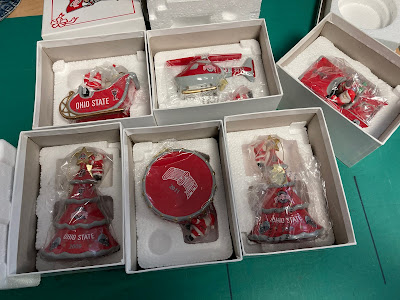 This Cat's Meow Halloween set was so cute. My neighbor loves Halloween and after I showed them to her, she wanted them so I sold them to her for what a paid for them - eight pieces at a buck a piece 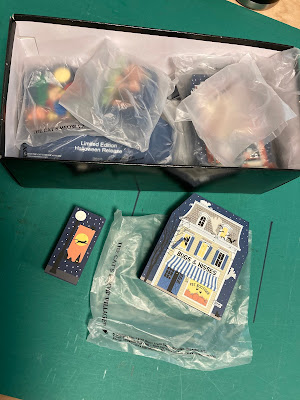 I bought this wooden drafting triangle just because it was cool. $1.00 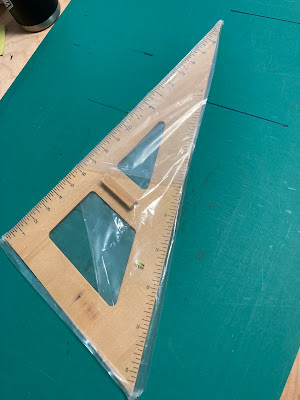 I got these two wood vintage office chairs - $15.00 for the pair! I will clean them up with some Old English Furnisher Polish for dark wood and they ought to look great. 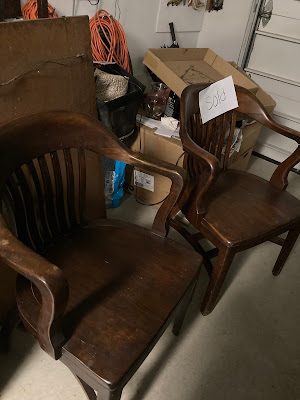 I also bought this blue enameled splatter ware pot and I had to buy the rolling pin. They lady told me her grandfather had make it and I am a sucker for rolling pins. She only charged me $1.00 for the rolling pin. 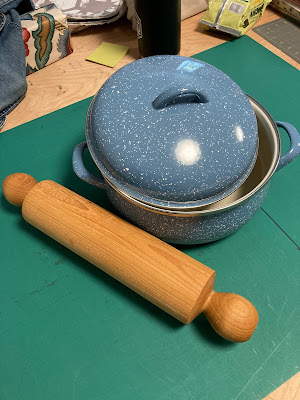 I got a pair of wire cutters - both of mine are awful which I found out when I was cutting the wire for the framing - and I picked up a model of an Apollo rocket to send to my brother who loves space stuff. I ended up going back to the sale on Sunday to look one more time. There was a collapsible shelf that was still at the house so I got it for my cast iron. It was made from some nice wood and was heavy. It worked out perfect. 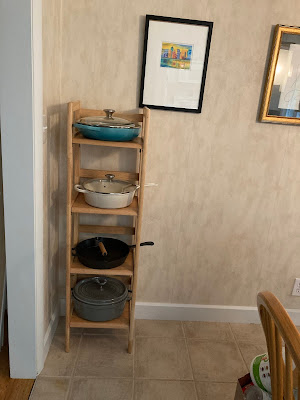 I decided on Sunday to cut out strips of flannel for a quilt. This quilt will be for a fellow that helps out with the band. While I was cutting away I get a knock on the door.  It was my neighbor. He asked me if I would hem the curtain panels for their sliding doors. He has been working hard for the last two months on remodeling the family room. I asked he how soon he wanted them and he said tonight would be nice so no one could peek in the doors. So I stopped cutting flannel and hemmed the drapes 3" like he asked. He sent me a picture and oops - they are still too long. 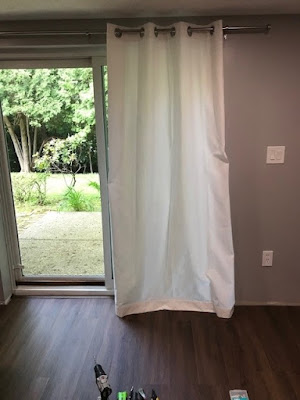 He said he didn't measure, but 3" seemed about right. I told him it was my fault for not educating him on what he could use that tape measure for that I gave him for his birthday! We both had a good laugh and I measured how much they needed taken up. So it was back to square one and hemmed the panels again. They were machine sewn so it was a easy job. Here they are all done. 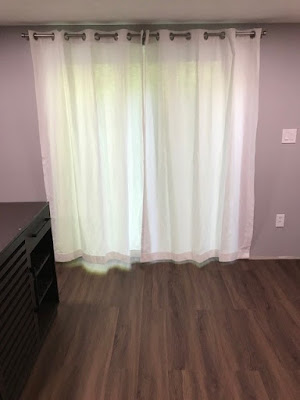 I got back to laundry and cutting flannel. I had a few blocks already made that were in my leftover bits flannel box. 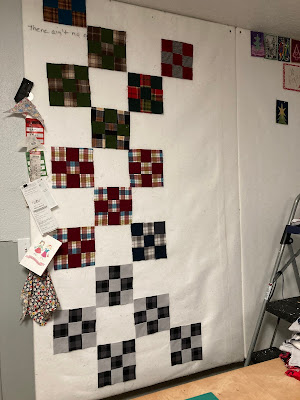 but when I cut the flannel I had I realized I just don't have any variety of solid colors. I guess I am going to have to get some. 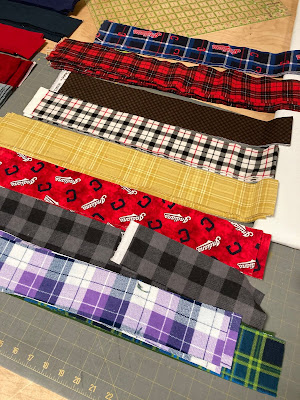 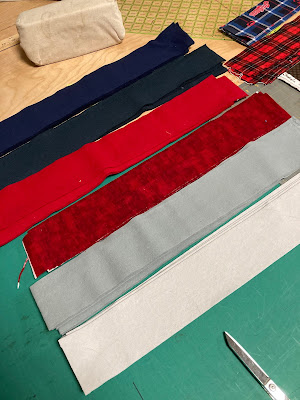 I have a few more plaids to cut. I would like to have this done by July 10th and I think that is doable. 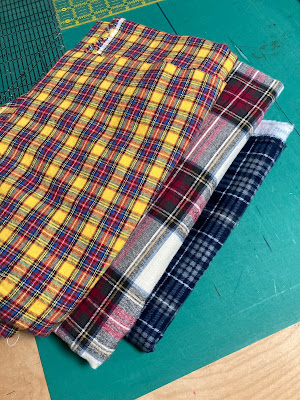 Another very productive weekend! It's amazing what you can find at an estate sale... love the rolling pin and pot. I ended up checking out a garden centre to see what was left after the mad planting rush... came home with eight more plants! LOL So had to get those in the ground. Then, spent time watering the new garden.

OK, I"m exhausted just reading your blog! And I thought I kept busy all day long! Love all your purchases! Each one is cooler than the next! Great finds!!! And you are generous!! What a nice person you are!

I love when you share pics of the band because I always love to see what Michael is wearing. Your weekend looks pretty productive to me!