Thanks you every one for your encouraging comments. I had to go to the doctor's today because my incision is still very red. They decided I needed an antibiotic so I thought I would stop at the library and say hello on my way to the drug store. The library gives me a chance to rest a bit before the next leg of my journey. The drug store is only a block from the library. Then I will head to the grocery which is only a block and half from the drug store then I have the trek home. It will be about a total of 3 1/4 miles. I will be tired tonight, but I need the exercise and I am trying to take advantage of the nice weather and the time off from work. If I don't get back to the library before Thanksgiving, I wish every one a wonderful holiday with family and friends!
Posted by patty a. at Monday, November 21, 2011 2 comments:

I am feeling every day

I walked 1 1/2 miles to the library today so I could catch up on my e-mail. Thanks to everyone for their well wishes! I am feeling better every day and finally did a little sewing yesterday. I just want all of this to be over with so I can get back to my life.
Posted by patty a. at Thursday, November 17, 2011 3 comments:

Where have I been?

Thursday, November 4, I woke up at 2:30 in the morning with pain in my belly. It went on for four hours so I decided to drive myself to the 24 hour emergency care facility. They took a CT scan of my belly and I had a five pound mass! Holy cow! The doctor said "You need surgery" and went off to find me the best doctor in American who is Dr. Jenison. I left the emergency facility and went home to wait for Dr. J's office to call. I did some dishes and headed to Dr. J's. He was still in surgery, but he saw my CT scan and the patient manager told him that I walked into the office bent over in pain so he said just to have me admitted. I went back home, finished the dishes, packed a bag, and waited for the hospital to call me when a bed was ready. My brother, Jim, came and picked me up and dropped me off. Now the fun begins!

I got checked in and the surgery prep began. I didn't know what time I was going to have surgery yet, because I was on stand-by. The gave that stuff to drink to clean out my guts, but after a half gallon of that stuff I was feeling pretty bad and sick to my stomach. Between the drinking and the IV my belly was really filling up with fluids and the pressure was getting painful. They gave me some percocet (spelling?) which really upset my stomach and I ended up hugging the toilet. Since I couldn't drink the stuff it was a matter of cleaning me out from the other end.

I went down to pre-op about 4 p.m. and had to have a chest x-ray. The joseling around on the gurney was not fun. The more I laid there the worst I felt. After about three or four hours in pre-op I asked to go to the bathroom. The nurses walked me down and when I went to get up I passed out and did a Steven Tyler! My son was there and heard me hit a table that was in the restroom and then I hit the floor. The was IV fluid all over the floor, I was all wet, and the nurses were frantic. They helped me up to a wheelchair, cleaned me up, and got me back to my bed. Next they had to take me to get a CT scan of my head to make sure I didn't have a brain bleed that caused me to faint. More bouncing around and I was blowing chunks. No broken bones, no brain bleed, so they could go ahead with the operation. Since I had fallen on my stomach, I was really in misery. I couldn't even cry because it hurt so bad. 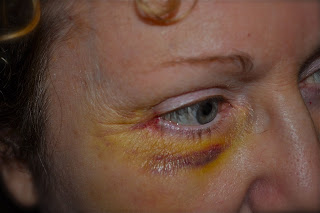 Finally surgery happened at 6 p.m. and lasted to 11 p.m. Besides the mass, I had 3 liters of blood in my belly. I have to say the staff at Akron General were absolutely wonderful! It was like being at a five star hotel except for the being sick part! I truly appreciated all the care and support I received from all the staff and doctors. When I was really suffering, they held my hand and I felt how much they really cared. 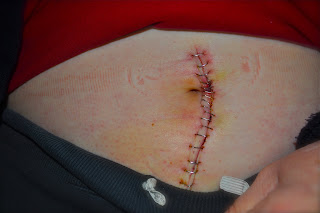 I am recouping for a few days at my brother's Mike house before I go home by myself. I am not allowed to drive for a month. I have an appointment in two weeks to get my staples out and will be off work for six weeks. Glory, I feel like I have been run over by a truck and they backed over me a couple of times for good measure. I am feeling better every day and will just spend the next six weeks taking care of me. I will check in if I get a chance.
Posted by patty a. at Wednesday, November 09, 2011 6 comments:

10 days to go and a little sewing too! 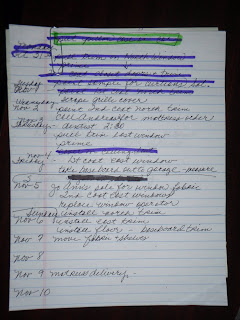 I feel that I am on schedule or just a little ahead. I had a productive evening.
I got the first coat of paint on the window trim and the second coat on the closet doors. I will have to wait until tonight to see if I need a third coat. The people that lived in the house before me were smokers and sometimes the yellow comes thru as the case for the doors in this house. I had primed and painted them numerous times, but they still look a little yellow to me. Since the door to the fabric storage room was leaning against the wall I threw another coat of paint on one side. I will turn the door around and put another coat on the other side tonight. This was not in the schedule, but it did not take long and since I had the paint can out why not? 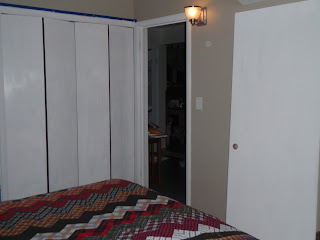 I also got the grille cover back on the heating duct and make some brown rice for breakfast tomorrow. I sat down at the sewing machine and put together those last 6 blocks for the third pink and brown quilt, trimmed them, and hung them on the design wall. Tonight I will put the top together. 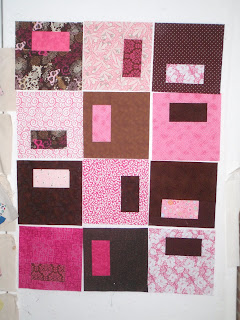 I decided I needed to make an arty piece to celebrate National Metal Day 11-11-11. I made up a word doc and printed it on fabric. I plan on using some gray fabric paint to color it - it is just too white. I dug out my most metal fabrics that will go into the piece. I also bought some metal studs - pyramid shaped and some that are skulls to embellish this piece. Since I am so short on time, this will not be a big piece. I am aiming for around 30" x 38". 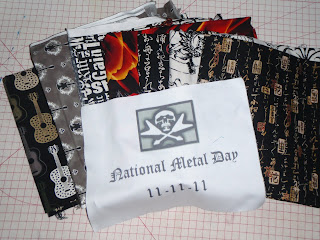 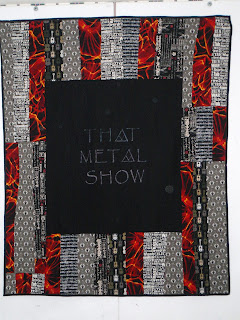 How many of you out there is going to celebrate National Metal Day on 11-11-11? How do you plan on celebrating? VH1 Classic has a lot of great programming leading up to NMD and all day on the 11th. That ought to keep me moving while I continue my remodeling!

Yesterday's sunrise was beautiful and the day was also beautiful. I don't know how warm it got, but it was really nice outside. Here is this morning's sunrise. I think we could be in for another lovely day! 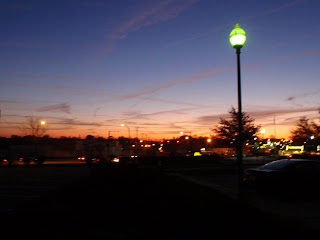 Last night I sat down after work to watch Holmes on Homes and Million Dollar Contractor that I had taped from the night before and next thing I know two hours had passed! Oops! I needed to get to work.

Here is one of the windows in the fabric storage room. 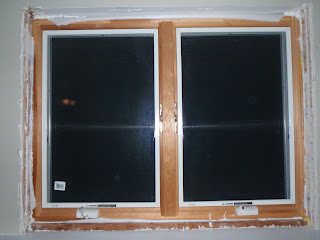 I took the trim pieces out, marked them, sanded them lightly to get the dust off, and primed them. Here they are drying on the sawhorses in the living room. 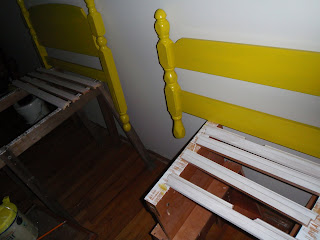 Here is what the window looks like with the pieces removed. 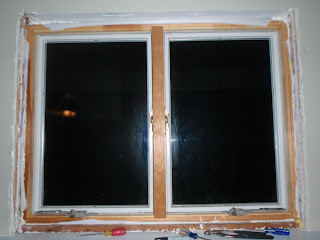 I have to do better tonight - 11 days until Peg comes.

Here is what the living room or should I say paint/workshop looks like right now - I didn't want you to think I don't have a messy room! 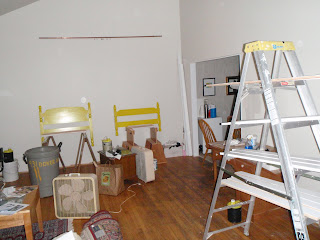 I press the piece of fabric I picked up when I was in Dover on Saturday. I found this for $5.00 a yard. I plan on using it for binding for one of the pink and brown quilts. 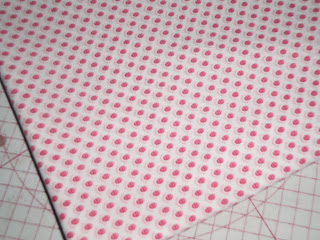 The sunrises have been very gray lately, but today we have a little color. The camera makes it look prettier than it really is, but I will take anything other than gray since it is THE FIRST OF NOVEMBER ALREADY! Where did this year go? 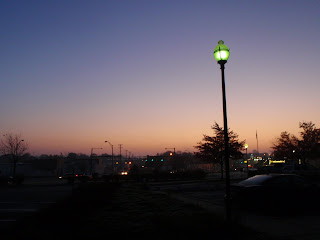