Thursday after work I tried to get some mowing done. Got the front yard and one side yard mowed and was starting to trim when this rolled in 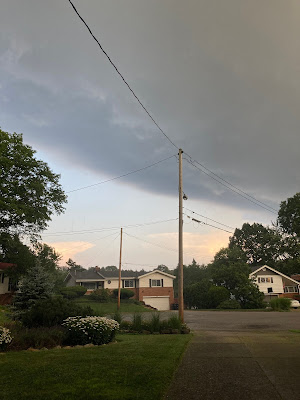 Friday I spent most of my day working on the odds and ends quilt while watching the TDF before I had to get ready to head to my brother's for the gig that night. I got the quilt pin basted by Saturday afternoon. 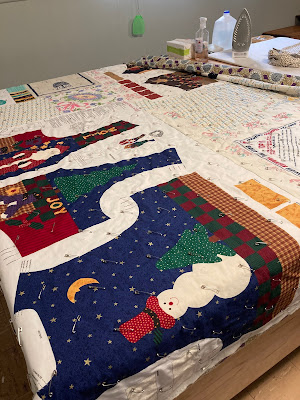 We were lucky for Friday's gig that we had lots of help loading in and loading out and it wasn't' raining. It did sprinkle during the show at times. At this venue they make us set up the merch booth right next to the speakers. It was so loud I had to write things down to communicate with customers. 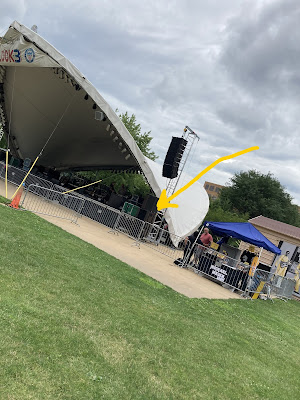 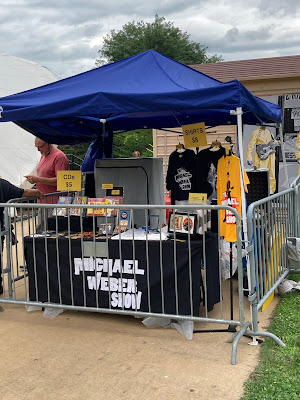 Here is my view to the stage. 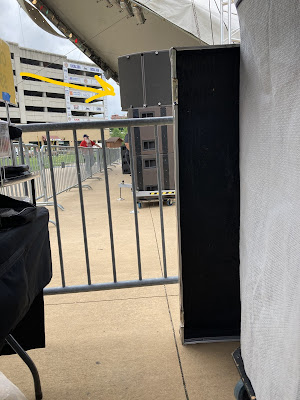 This is not the first time we played here. Instead of my ear plugs on a headband, I bought these and they worked great. 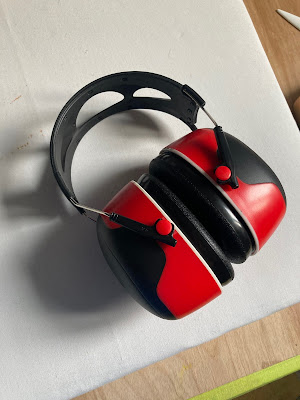 Here are a couple pictures from the show my SIL, Michael's mother, took. His pants and shoes were more green than what they look like in the pictures. You can see we had a crowd! 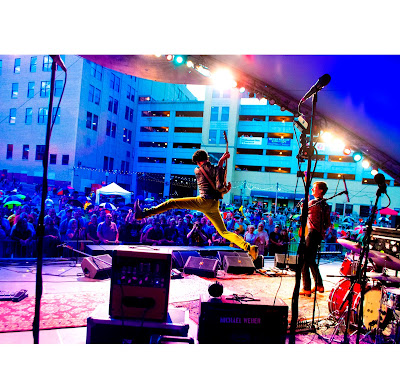 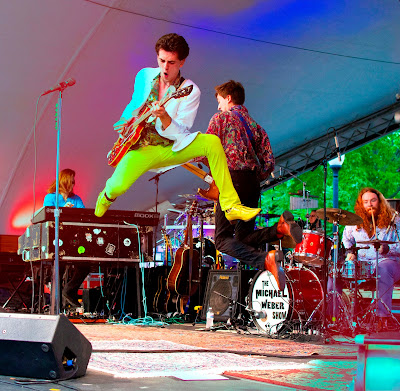 Saturday I made chocolate and vanilla shortbread cookies since our gig was out of town. 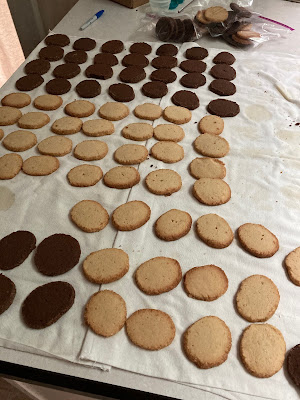 We went to Painesville, Ohio which is about 55 miles away. No rain loading in or loading out, but it rained thru the first 40 minutes of our set. These shots I took from the merch booth. 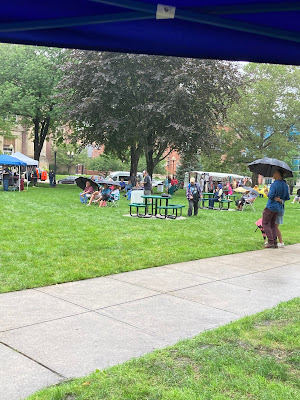 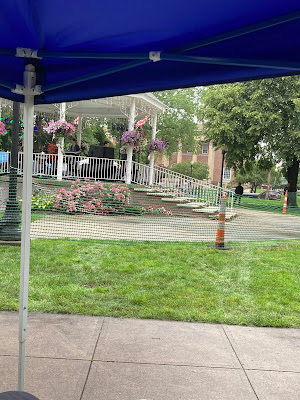 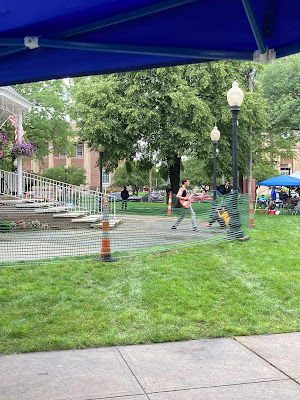 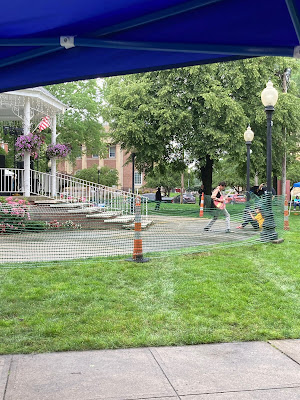 On Sunday morning I got outside early to try and get some weeding done. 2 hours and 45 minutes and 10 five gallon buckets of trimmings and weeds later, I went inside to watch the last stage of the TDF. Here are a couple before and afters of the clean up. 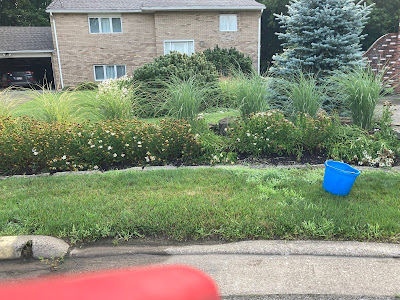 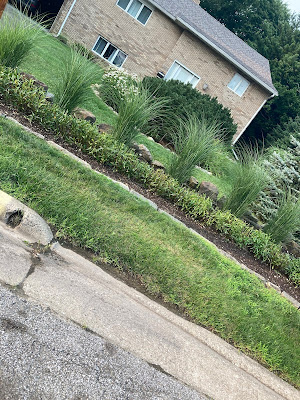 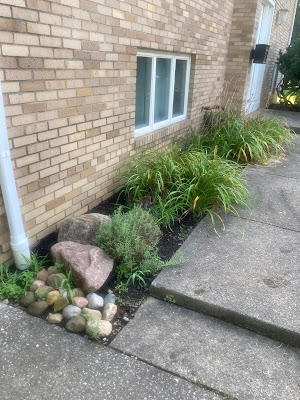 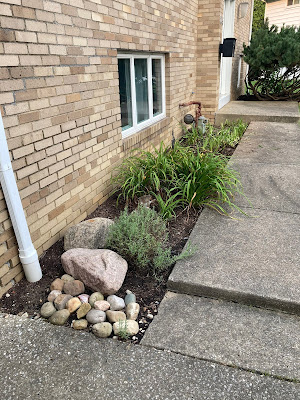 I got 5 more tote bags done. 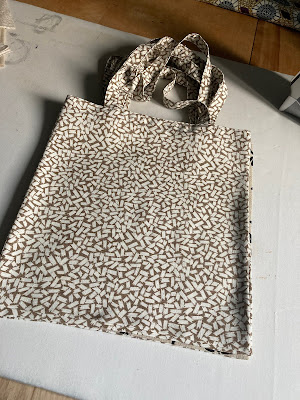 I spent some time Sunday morning rearranging what I had hanging on the walls of my downstairs foyer. It's about time I found a place to hang my cross stitch! Here are the befores and afters. 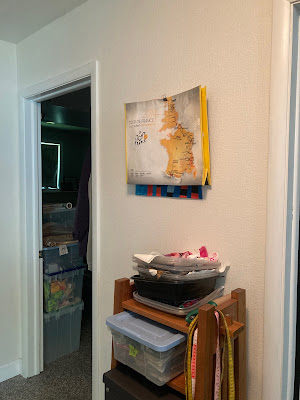 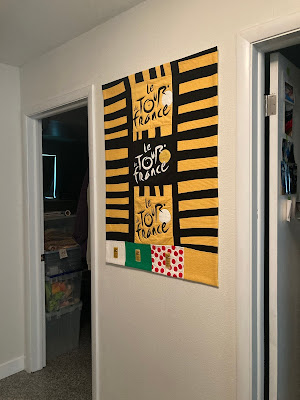 Yes, I moved my TDF piece from one wall to another 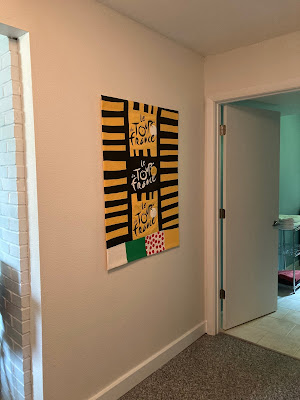 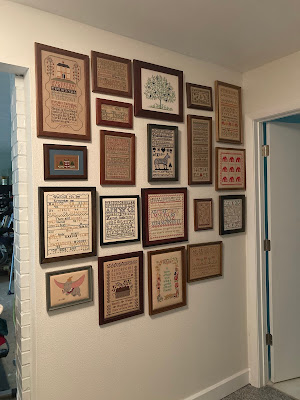 Before I hung the TDF piece back up I finally sewed on the labels that had been pinned on the back ever since I made this piece in 2010. 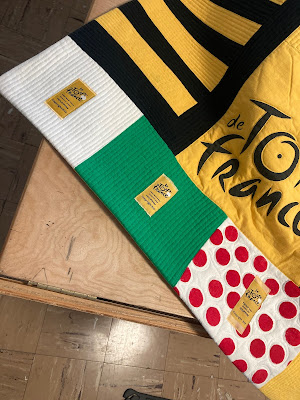 My plan was to move a larger quilted piece where the cross stitch pieces are now located, but the quilted piece was too wide. SO, I decided to hang it here. 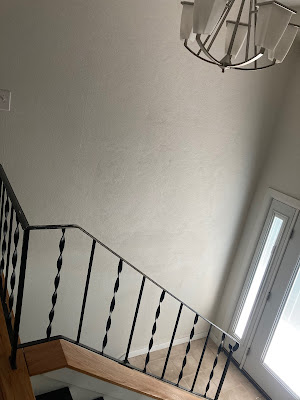 It would be better if it was a bit higher up on the wall, but this is as far as I could safety reach with the ladder. I am ok with it.  Before I hung it up I added five more guitar picks I had acquired. 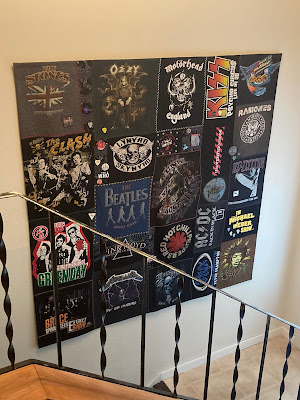 That is a big job hanging all of your cross stitch pieces. I love seeing collections like that on the wall together.

The quilt looks fantastic on the wall!!! WOW...it is a quilt, right?? I did click to look closer...very cool! You are like the energizer bunny! And I thought I was a busy lady! You've got me beat!!

he did the splits in the air! wow!