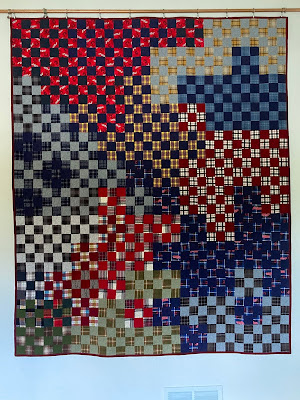 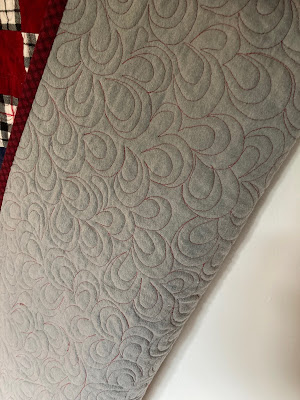 Here is the fellow that received the quilt. He helps out with the band. Since he started out helping with loading and unloading the equipment, I don't have to do that as much and sometimes not at all. He also helps my brother out setting up the equipment.  He now lives in a cabin so if you live in a cabin you need a flannel quilt, right? 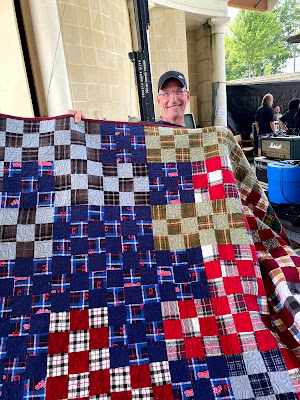 Before the show a wedding party from a church close by walked over to have pictures taken. Her dress and veil were beautiful, the bridesmaids were stunning, and the men were all so handsome. 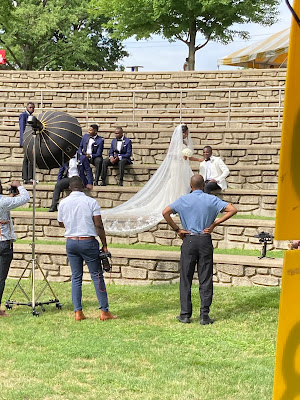 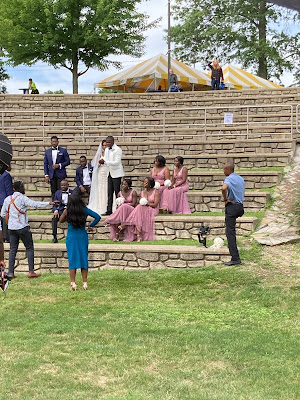 The venue had catering for us. There was chicken, pasta, and the most wonderful meatballs with the most delicious sauce I have had in a long time. I didn't think to take a picture until I had already eaten two meatballs. I was hungry! At the end of the evening there were only 5 meatballs left out of one of those big tray with the sterno flames underneath it. I was not letting those go to waste so I took the foil that had cover the meatballs under the lid and made a little nest to hold them. I held those meatballs and sauce in the van all the way back to my brother's house. If we ever play there again, I will make sure I bring a zip lock bag next time! LOL!! 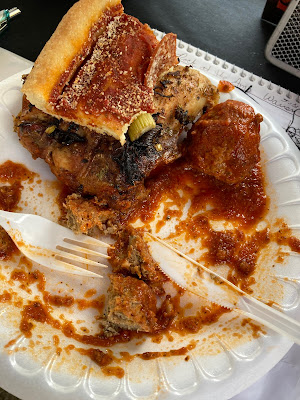 Here was my view from the merch booth. I was busy and sold a lot of shirts and CDs.  We opened for for Van Halen tribute band.  The place was packed and I heard a lot of great comments. 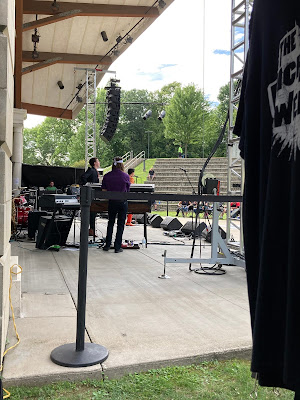 Michael wore these orange shoes with his orange jacket and pants. This is one of his jackets that he had me add the darker orange accents and the embroidery accent pieces on. 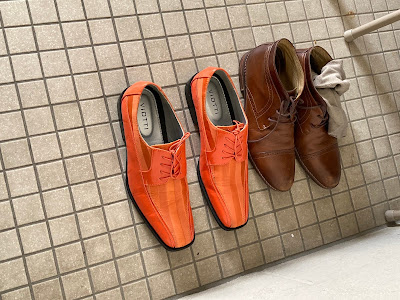 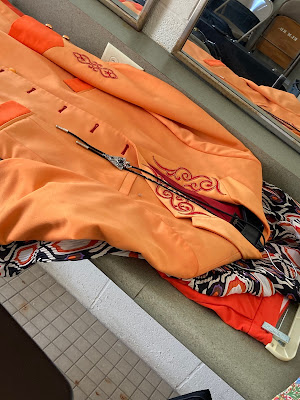 I had left the house at 12:15 p.m. to head to my brother's house to go to the show and was in bed at 12:15 a.m. I was tired, but I woke up at 6:30 so I got up and worked on tote bags for the merch booth. I used quite a few Saturday so I needed to get more made. I had a bunch more already cut out and I ended up getting 30 made while I watched the TDF. I decided not to box out the bottoms which saved me several hours of work. I am just giving these away so flat tote bags are good enough 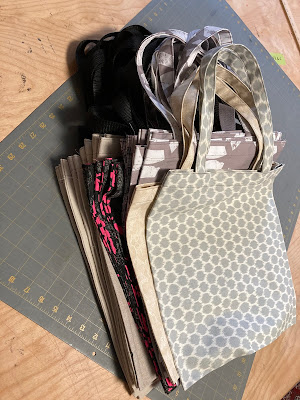 I cut out 14 more bags and will work on them when I have a few minutes here and there.  Most of this fabric was material that was given to me or left over from another project.  It will now be out of my fabric storage room and put to good use.  Several people did ask what they owed me for the bag. 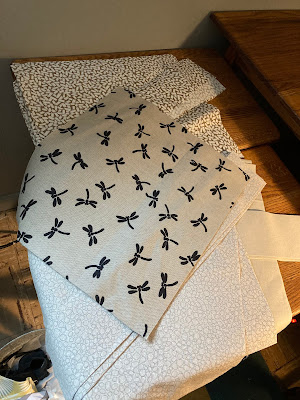 I got a bit more done on the deer cushion cover. I got to stitch for a bit before the show on Saturday so here is where I was, where I am, and what the design looks like. 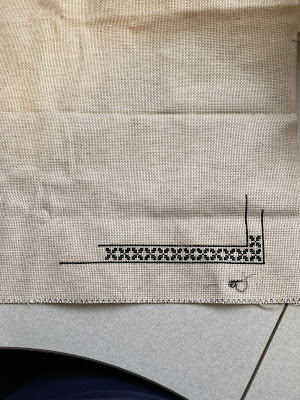 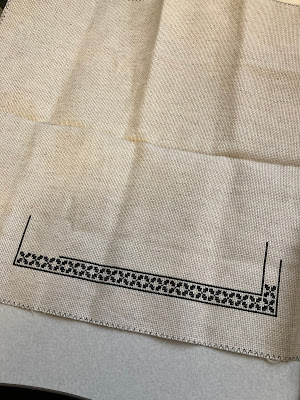 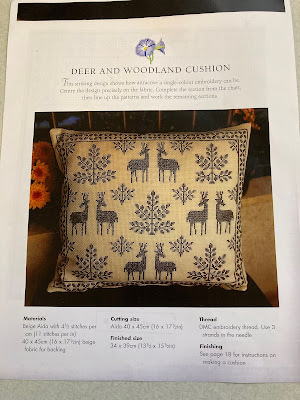 I bet he really liked the quilt, and yes every cabin needs a quilt.

That is a pretty setting for the wedding photography.

It's nice to hear people appreciated the tote bags. It really is a good way to use up the odds and ends of fabric that you don't want any more.

Love your new x-stitch project :) I'm doing the Pandemic Mono by Long Dog Samplers.....I'll finish it someday....when the Pademic is long gone ;-) How awesome to gift your newest quilt....looks like he really likes it. You've hit the solid flannel jackpot!!!

This quilt turned out well. I've seen many sixteen patch quilts recently but like the irregular edges of your groupings. It adds interest. Very kind of you to make it for your friend and helper.
The bride's veil is stunning. What a happy day for them and joy for you to watch for a while even if you didn't attend the wedding. I wish them many happy years together.
We are all trying to use up our leftovers and remnants, aren't we. Good plan to simply gift them with a purchase.

The flannel quilt is so awesome and perfect for a cabin! Maybe if people want to pay something for the bags you could put out a donation can for your favorite charity. Regardless, it's a great way to clear out some fabric. Now I've got about a dozen drawstring bags that I need to gift!