First, the commission t-shirt quilt. I now have 30% of it quilted! The area inside the pink lines is quilted. 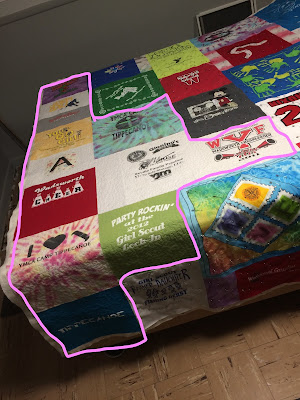 The plumbers showed up on Saturday and finished fixing the tub faucet. They will be back in March to replace my hot water heater that was manufactured in 1998. They also trimmed out a window for me. The father has rental properties and can do just about anything. I tried to figure out for years how to finish out this window. It is deep set because of the way this house was built and how we had to build out the wall when I remodeled the bathroom. I got some birch plywood and the guys made wide extension jambs to fill the gap between the window and wall. I need to sand, paint, and then trim out the window, but the part I couldn't do is done!
Here is the before and after. It is a good thing I have tools because they had to use my compressor and nail gun, and my Multimaster. 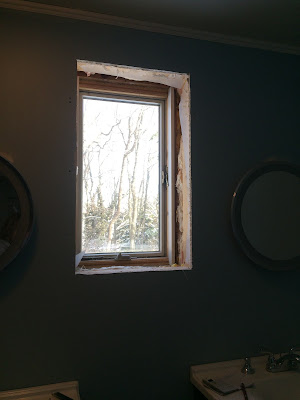 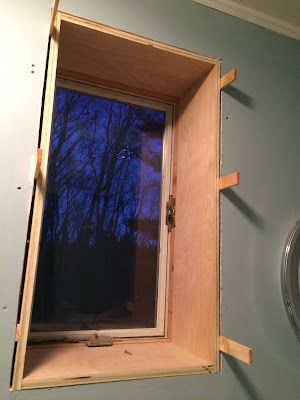 Between helping out the plumbers with tools, I worked on the Harley quilt. I want to put an X on the quilt to symbolize this would be the 10th anniversary of Andrea' death and it also stands for a hug. Here is what it looked like in progress. 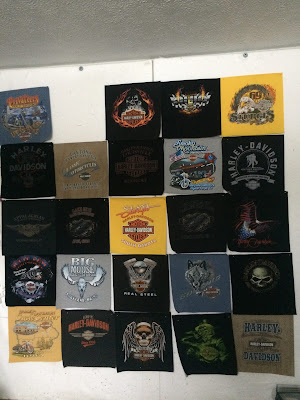 I didn't think there was enough contrast between the colored t-shirts and the black background t-shirts. Black t-shirts with a prominent design were kind of muddling up the look. I decided to try and get more black into the quilt, but how? The Andrea's mother, also named Andrea, had sent me 22 more t-shirts. In the past I would have taken this t-shirt 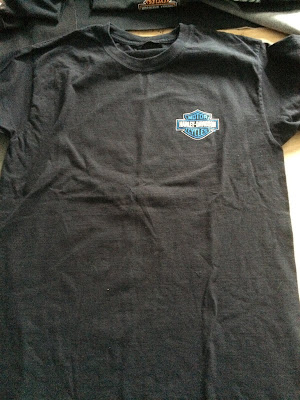 and cut a few inches around the emblem. The light bulb went on and I cut bigger pieces so I could add mostly black squares to the top and have just that bit of color to get a better contrast between the colored blocks and black blocks. Lesson learned although this is a more unique situation with the design of this quilt. I didn't have enough black t-shirt fabric so is it cheating that I went thru my stacks of old clothes and found 3 black t-shirts, cut them up and added them to the quilt? LOL!!! Here is what the top looks like now 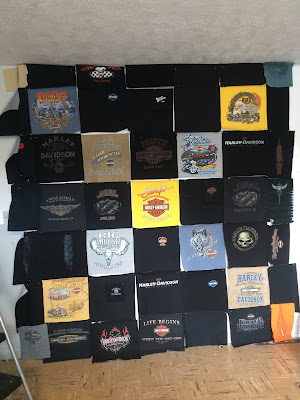 Well that's a cool way to destash old clothes, lol. We had to build our windows out in just about every room when we replaced our windows. After getting my fingers caught between the old sash windows we replaced every one with Pella except the ones that we put window air units in. I like that black t-shirt layout.
xx, Carol