The remaking of my friend's small quilt is done! It turned out about 43" x 54" - I forgot to measure. She was very happy with it. I finished hand stitching the binding on Saturday so my friend who came over on Saturday could take it home. 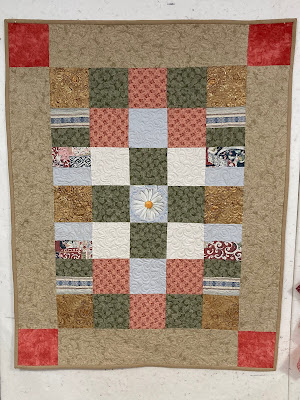 My 3rd finish for 2022 is the pink chevron quilt made from pieces cut from my scraps. It finished at 39.5 X 45.75 inches. This will be a giveaway quilt. It's not the prettiest quilt.  In fact, it's on the verge of ugly, but the point was to use up scraps.  I finished this on Sunday. 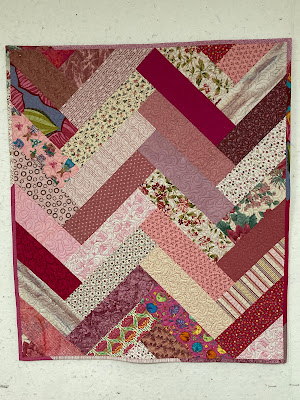 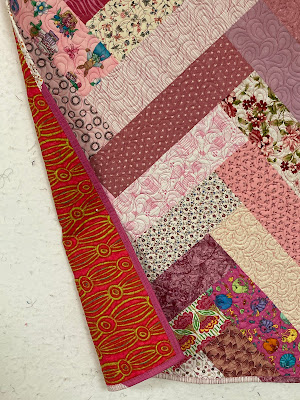 The pieces were cut 4 1/2" x 16 1/2", but those other green chevron quilts  I did were cut 4" x 16 1/2". I think I prefer the 4" wide strips, but I still have a pile of 4 1/2" wide pieces and I am not going to recut them. On Saturday my friend laid out on the design wall another small quilt from these scraps. I now have it under the machine and partially machine quilted. Meanwhile, even after using 40 pieces in the pink quilt and 44 in the next quilt, I still have this pile of pieces left! Geeze! 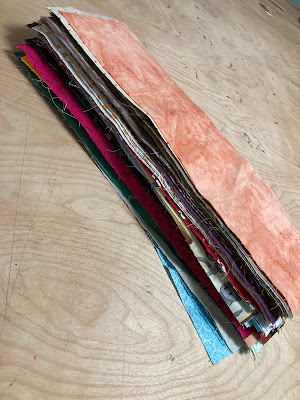 Lets now circle back to Friday's adventure with the furnace guys and the electrician. They both arrived pretty much on time. The furnace guys didn't need my help, but I had to hang with the electrician to show him all the little jobs that needed done. He installed a new dimmer switch; the old one worked, but it was just ugly! 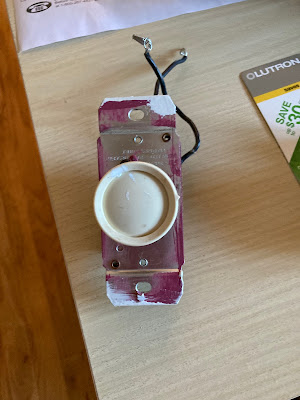 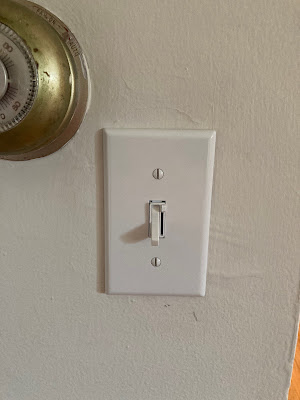 Replaced the door bell including the button outside which now lights up! Look at the crazy wall paper that was behind the transformer. There were also some dark spots that indicated the transformer was running hot so I am glad this was replaced! 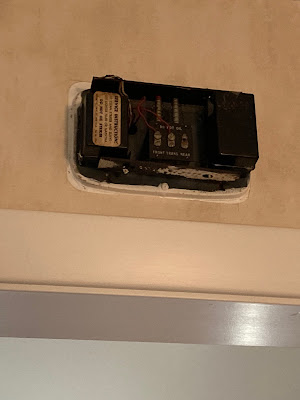 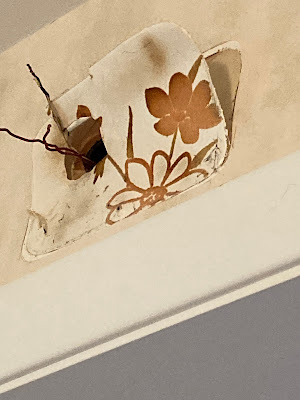 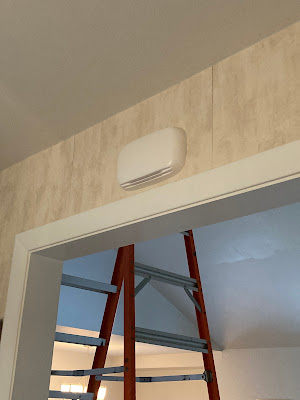 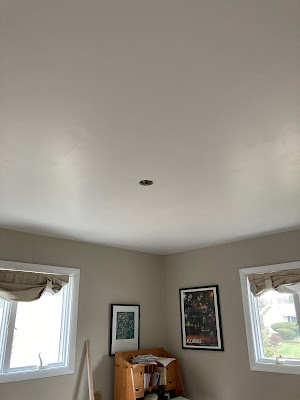 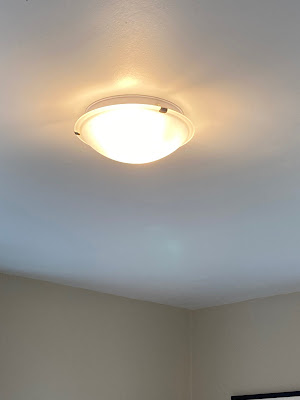 The electrician had to run a wire from the switch box to the new ceiling light. He went up in the attic to do this. In order to see where he had to drill a hole for the wire in the wall plate head, he jammed his cell phone in the light switch box with the flashlight on! This cracked me up! I bet the people at Apple never thought the phone would be used for installing wiring! 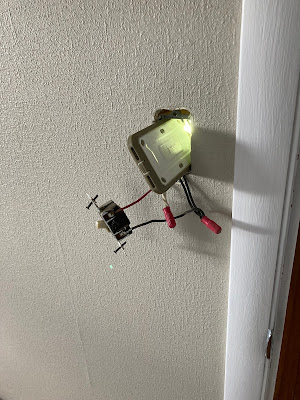 He hung my bathroom sconces back up. 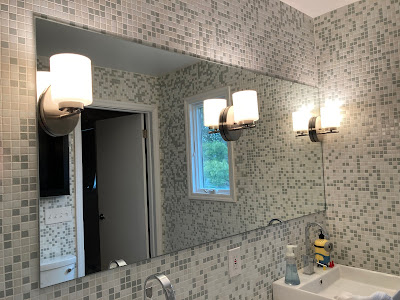 In the laundry/utility room he put a cover on a junction box and replaced a receptacle. Then he investigated the can lights in the living room. The bottom line is that the 60 year old fixtures need replaced. Two of the cans were not putting out the voltage needed for the lights to work properly. Everything else on my list was completed so I am happy! 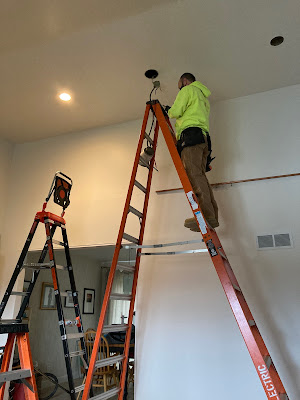 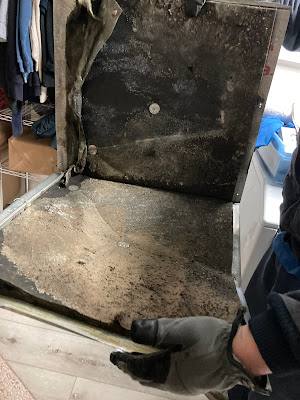 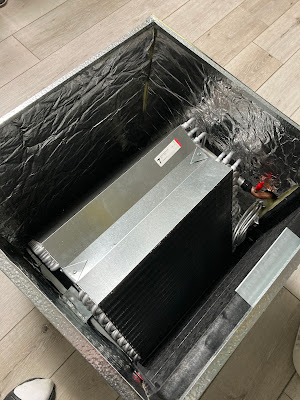 It took the guys a good 5 hours to replace the parts and do the testing. Here is them taking it apart and then the finished product. They also fixed my condensate line; it was not sloped properly so the water didn't drain right and that may have lead to the mold issue. 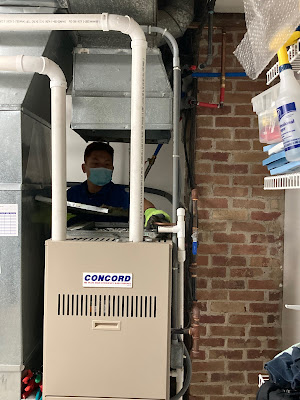 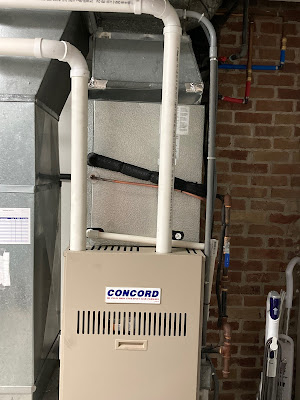 My next thing to do was to get new tires on the car and a front end alignment. The tire shop is a block away from a Goodwill so I walked there to see if they had any frames. I found two! For the bigger one I will take it apart, sand it down, stain it, and size it when I have a piece of cross stitch to frame. The one with the carved leaves - I may design my own sampler to put in this one. The frame is to pretty I don't' want to cut it down! They were $4.00 each. 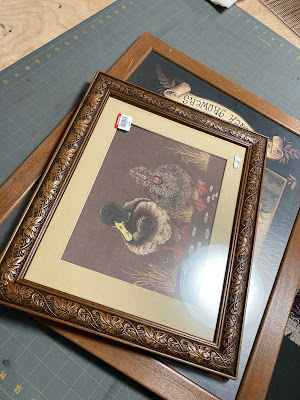 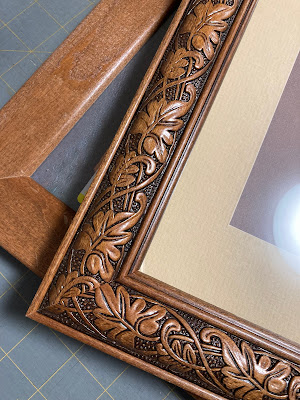 I ended up sitting outside waiting for my car to be done because nobody in the waiting room was wearing a mask. They had a bench outside and I cross stitched while a few snowflakes fell on me. I also watched the never ending line at the McDonald's cattycorner from the tire shop. Eventually I had stitched everything I didn't need a chart for and my hands were getting pretty cold. Yes, the sign reads 32 degrees. LOL!!! 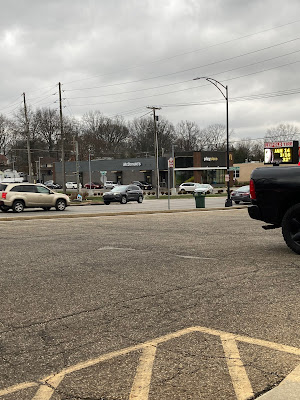 Saturday my friend came over and we kept busy. She pressed all the flannel 9 patch blocks I had sewn together, I finished the binding on her quilt, we empty two scrap boxes and sorted the strips by size, and she took some of those 4.5 x 16.5 strips and designed another baby chevron scrap quilt. Here is the bin with all the dark flannel 9 patch blocks that are ready for a quilt. There are still more that need sewn together; I'm going to need a bigger bin! 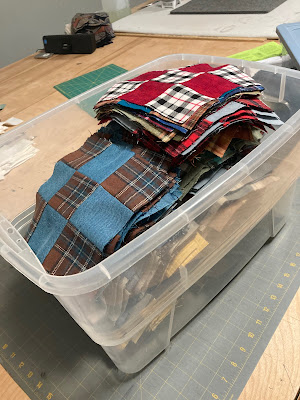 Sunday I worked on the chevron baby quilts and then Monday was all about the snow! The snow started about 4 on Sunday and it was so light I thought we just wouldn't get that much. Was I ever wrong! I was outside by 5:30 am on Monday to start shoveling the driveway before I left for work and there was a 21" drift in front of my garage and 14" everywhere else! It was still snowing too.  I shoveled a path to the end of the driveway then gave up. The streets had not been plowed so I was not going anywhere anyway. 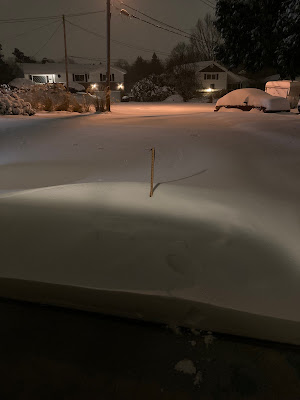 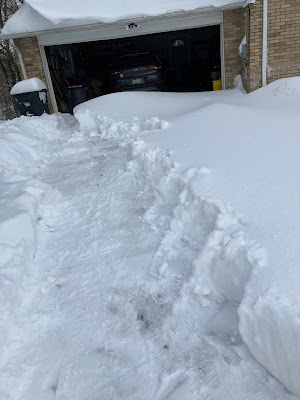 So I called in to work and took a day of vacation. I worked on shoveling the driveway throughout the day on Monday and quilted the second chevron scrap quilt between shoveling sessions. The city came at 6:30 last night to plow the cul-de-sac, but left a big patch of unplowed snow at the end of my driveway. Remember this stuff is up to my knees! 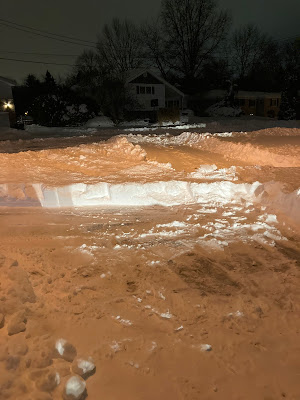 So I had to dig out enough of that snow to connect to the area that was plowed to get my car thru. I didn't think the stuff at the far end that the blue arrow is pointing to was going to be a problem. I was wrong. I got stuck. With the new tires and rocking the car back and forth six times I was able to get out. Geeze! 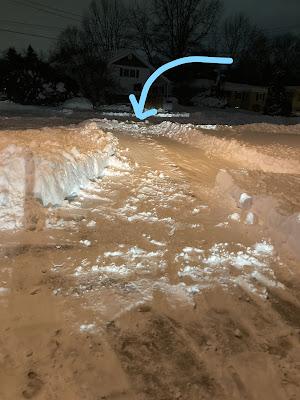 That snow sure is pretty to look at far far away!

Oh my goodness, what a weekend you had! First, that quilt you fixed looks absolutely wonderful. What a great job you did. I'm sure you're very happy with all the fixes the tradespeople did. Those furnace pictures were surely surprising. Your furnace must be working a lot better now. With all that snow you had to deal with, I'll have to make you an honorary Canadian - LOL!! That was a lot of snow! I bet you your muscles must be aching. I hope things settle down. I started working on a baby quilt with my friend - I'll send you pictures via email. It's going to be a challenging project - but will be very cute when done.

You live in Ohio, correct? That amount of snow (14" and more), does it occur often?

we just got a trace, there is such a thing as to much snow and you got it!

I can see why you had to stick with the electrician. That was a long list to get fixed.
You really got your workout shoveling all of that snow.

That is one busy few days off. Good job you had your car and furnace sorted before all that snow came.
Love that pink quilt...
Stay warm

That's a lot of snow and a lot of digging! At least you had a nice productive weekend and got all those jobs done around the house before it landed. The picture with the guy on the ladder made me think what high ceilings you have.

Wow, how good it must feel to get all that electrical work done. Good thing the transformer got replaced…..what fortunate timing! I’m jealous of your personal ironing helper. How nice was that? I’m glad you were able to get your car unstuck….it’s just not a good start to the day to be stuck in snow :( Hope your keeping warm

Oh man on the snow! That's a lot of work to shovel all that out of your driveway. But you know... be thankful that you are able to do it!

Love how the chevron quilt is progressing!

That has to bee the most productive weekend ever! Isn't it great to get a slew of home projects done? It's take us 20 years, but we finally have great repair people that we can call on. We've got a new hot water heater and drain pump on the dye sink coming up. The WH is 24 years old and I don't want to wait until it dies on a Sunday morning. The drain pump has gotten to where it works 98% of the time. That's not good enough for me! I don't like mopping the basement floor.

Congratulations on finishing two quilts. The babies will love them.
So much snow! And all your repairs. I can't believe how much work you are doing and then you plan to move. It seems like it will be too snug and cosy to ever do that.