Sacrificing part of the design wall for a greater cause

Here is my delivery from Keim Lumber on Monday. More money not spent on fabric! I bought 5 sheets of drywall and the trim that is bundled with the yellow invoice laying on top. The rest of the trim is baseboard I bought last year. 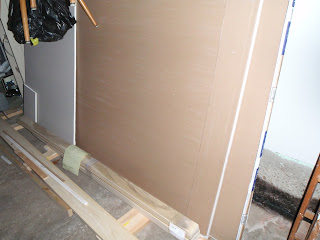 I got up at 4:12 am to demo the wall in the office/bedroom. I wanted to get the demo done before my brother showed up at 7:30. 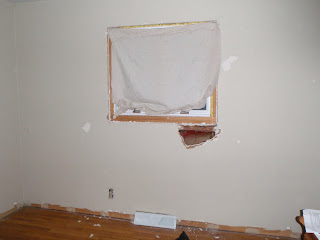 An hour and 20 minutes later 99 percent of the job was done and the trash bagged up and taken outside. There were a few nails I could not get out - I couldn't get enough leverage while standing on the ladder. 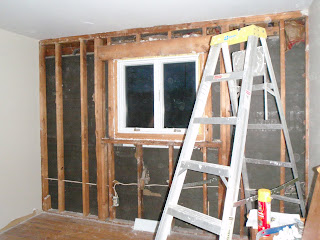 My brother Mike arrived and after reviewing the to do list we had a snack. I made home made cinnamon rolls like our Mom use to make when we were kids. 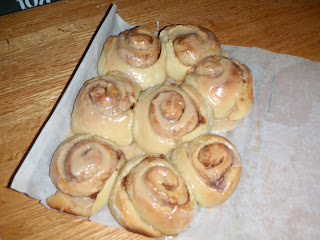 There was some extra wood framing that was structural for the bay window that use to be at this location (see former post) and it wasn't needed so we ripped it out. Well now you could see outside! 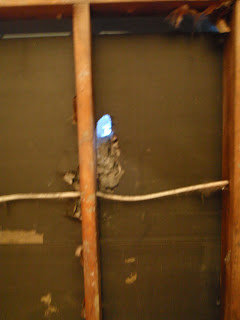 There was also a huge gap under the window! The picture is blurry - I was handing Mike a utility knife thru the gap. 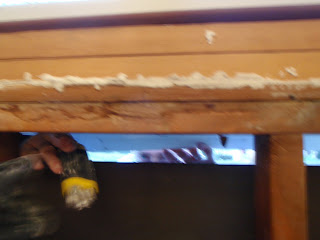 After surveying the situation, Mike comes in and asks if I have any foam board scraps. I didn't, but I told him we could cut off the bottom of one of my design walls which are foam board so that is what we did. You gotta do what you gotta do! 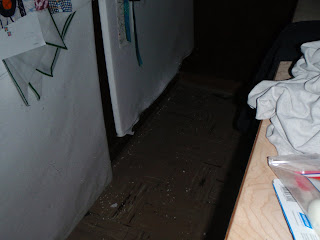 Mike used the foam board and entire can of Great Stuff expanding foam in a can to fill in the gaps. The difference in the room's temperature and the noise level is unreal! I still need to get a mason to fix the gap in the brick outside. Right now it is covered with flashing, but that is not a permanent solution. 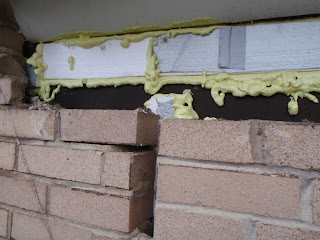 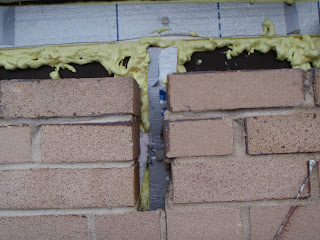 We took the scraps and stuck them over the expanding foam that we filled the holes with on the inside too. 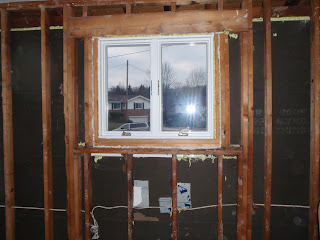 Once that was done Mike noticed to big bumps in the ceiling. He needed to know why so he started cutting away the drywall. 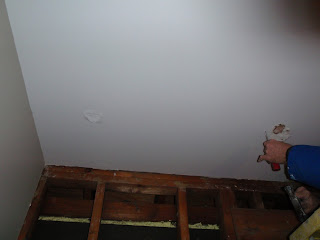 When the house was built some of the framing was below the ceiling level and the drywaller just thru the drywall over the bumps instead of trimming them. Well, Mike cut out a small area and I handed him my Multi-Master and he cut the wood off. 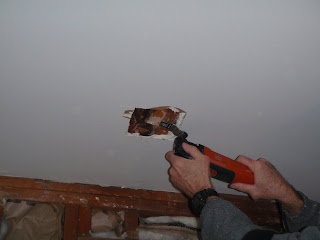 Now it's on to insulation. I did the cutting and he did the hanging. Look, he doesn't even have to use a laddler. It is nice having tall brothers! Since I am short I do the ground work and he does the high stuff. 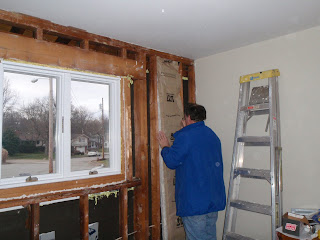 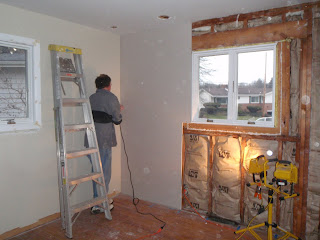 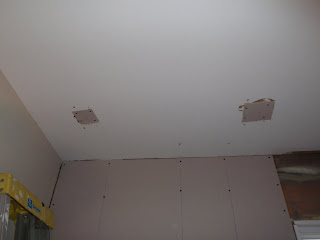 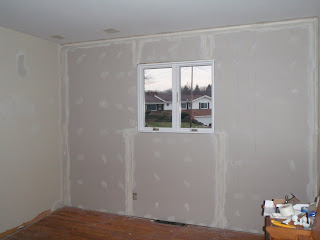 After the mud was on the walls, Mike helped me measure and cut the bottom piece of trim for the front window. You just can't hold it and measure it by yourself or at least I can't on a window this wide. Mike had to leave so I finished the trim myself. I still need to fill in the nail holes, caulk, touch up the paint, and install the finish hardware, but that's the easy part. This is the reason I spent Sunday painting. 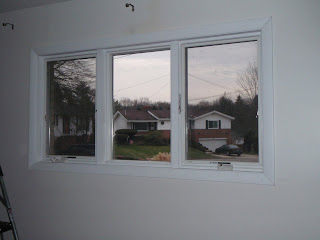 I am so happy that these two jobs are well on their way to being done! There is still a lot to do to get the house looking like someone hadn't come in and ransacked the place, but I feel like I am over a big hump.
Posted by patty a. at Wednesday, January 16, 2013

Well that should save you some money on your heating bill!

Soon you will have a new house they way you are going!

Thanks for the pictures, I like to see what you are doing.