Before my brother showed up at the house for our workday, I made a batch of cinnamon rolls and installed the trim around the front door. 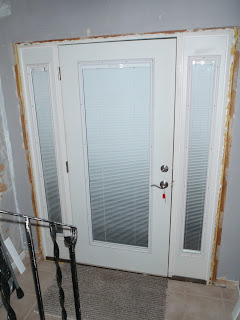 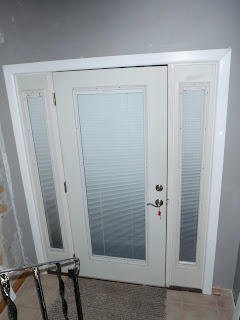 Mike arrived at 7:50 a.m. and after we sat and had a roll and juice, we got to work.
First project - repair hole in bedroom ceiling. The hole happened when I put my foot thru a space in the attic floorboards when we were in the attic adding more insulation - oops!
Mike trimmed the hole and I held the shop vac wand to catch the dust 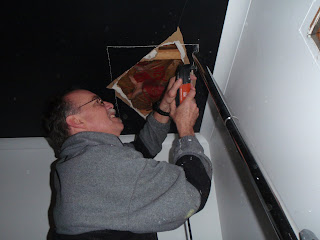 Mike patching the hole and I was on ground duty handing him screws, tape, mud, etc and clean up detail. Mike also put the shade in the ceiling fixture while we were in the bedroom. 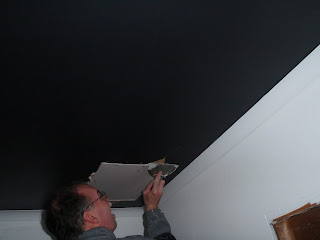 Next, install the new light fixture in the foyer. I only have had the fixture for seven years! Mike is on the ladder and I am holding the old fixture. Can you see the dust on that light? Wow. 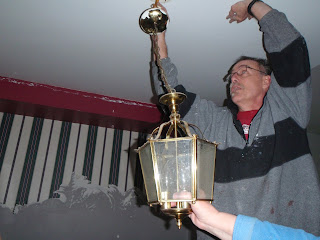 Mike figure out a way for me to hold up the fixture while he connects the wires and fixture to the electrical box. This is a fixture on a stick! Well, it is really a 2 x 4 x 8'. 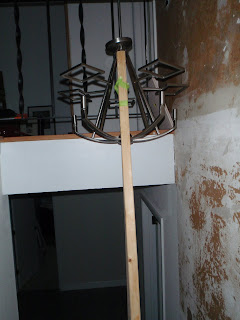 So here is a shot with me holding the fixture in place as Mike secures it to the box. 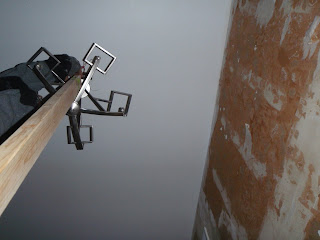 Mike was so proud of getting this done. Old versus new. 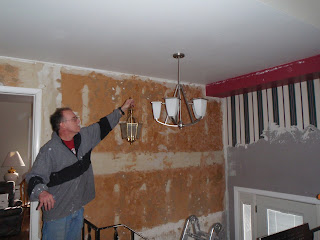 Mike attacked that ugly remaining wall paper and painted out the last bit of that awful wine paint color. It is a long way up there on a ladder! 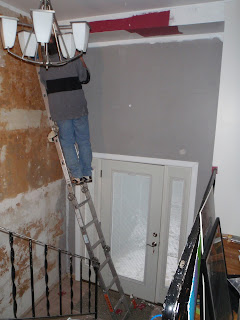 While Mike mudded the master bathroom, I fixed the door bell, and threw one more roll of insulation up in the attic to fill in this area. 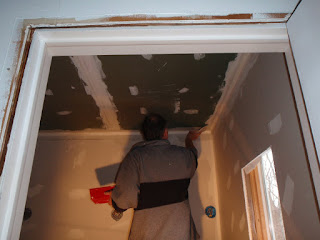 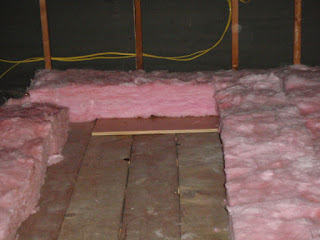 One of the last jobs was installing the last piece of backsplash in the kitchen. 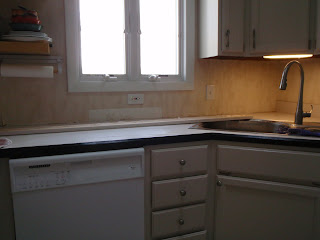 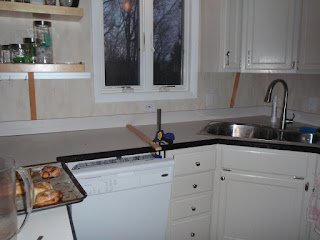 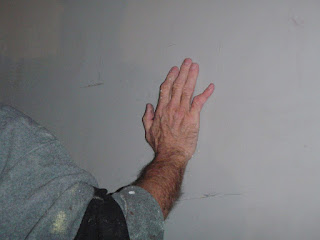 He dislocated his pinky last week playing basketball. He plays basketball twice a week. His b-ball name is Cobra. Well, Cobra has an appointment to see a hand specialist next week and he may need surgery. If his hand wasn't against the wall, his little finger goes east and west when it should be north and south. It just about make you nauseous to look at it flopping around (I am cringing right now!)

Mike stayed until almost 5 so by then I was beat and no sewing happened. Tonight is MQG meeting so I should have some sewing related stuff to report tomorrow.
Posted by patty a. at Wednesday, January 23, 2013

Ohhhh! Mike's finger looks really painful! Oh! We cal Frank Tim the Toolman because he always ends up with stitches or bruises somewhere. At one time we were on first name basis with the local ER staff.

Oh, and he has fallen though the ceiling in every house we've owned!!