Binding - a challenge - my kunckle

Over the holidays I spent a few days at my friend's house. She had lost her husband on Jan. 2, 2011 and she would have been alone for New Year's and I could not let that happen so we sewed and visited over New Year's. I did not bring any sewing, but was there to help her out. She set me on task to tackle putting binding on the second quilt she ever made. The quilt belongs to her mother-in-law and the binding (the satin blanket binding - LOL!) was shot. She has already removed the binding - thank goodness - so all I needed to do was to rebind it. We found some fabric in her stash and got to work. The challenge part was what to do with the corners - read on. She had not added a triangle at the corner so there would be a 90 degree angle. What I did was bind the long sides of the quilt first and complete the hand sewing too. Then I sewed the binding across the cut off corners. Now in this I cut off the excess side binding - I learned I should have not done that, but it was not the end of the world. Later on you will see that I use that as a guide to sew the corner binding and it was a nice handle to hang on to. 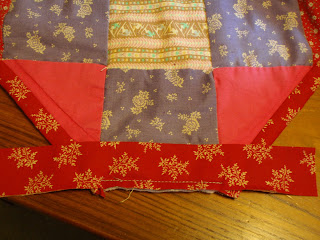 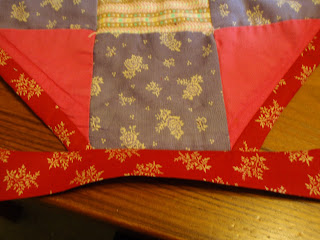 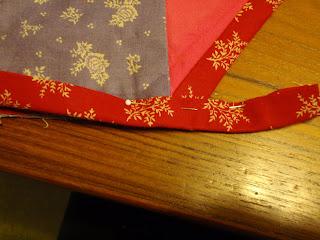 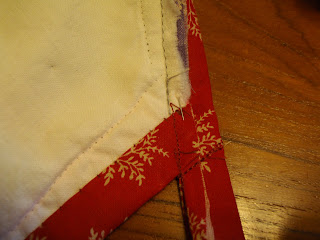 Next I trimmed the ends off the corner binding 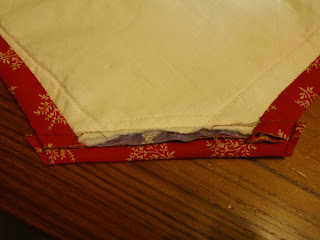 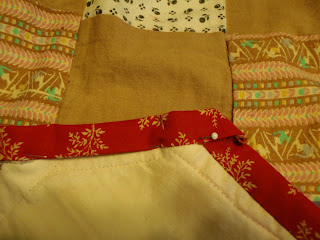 Hand stitch and your done! Peg took some pictures because she has another new quilt that has the same time of corners and now she knows how to bind them. I have not seen this done anywhere, I just figured it out. It looks curved in the picture but it was straight. 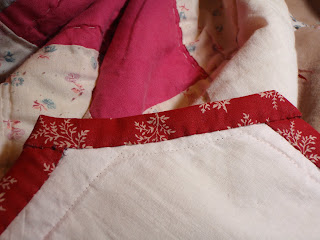 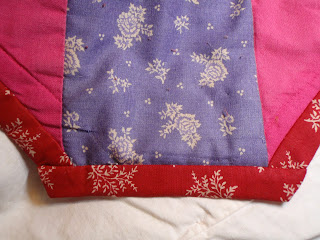 I started out with 3" binding stripes. I know that is sorta wide, but I wasn't sure how it would work with really narrow binding. There is a lot of raw edges to stuff in where you fold the binding over to the stitching line at the sewn edge.

Let me know if you have any questions or if this is a technique that helped you solve a binding problem - I would be intrested.

My knuckle looks pretty good this morning. It has healed up much faster than I thought it would. Look at the sky this morning - so pink! 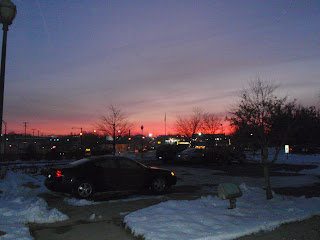 Looks cold out there in the dawn! Keep quilting.