I have been working this piece since April or May. All the t-shirts and denim shirts are authentic R.E.M. shirts - some mine, but most from my brother who toured with R.E.M. every tour since 1988. I improv pieced them together and I am now adding embroidery to up the arty factor as this piece was accepted into the High Arts Prize in the town where I now live. I edited my post for the day to included a bit a background so I could link this to the AHIQ monthly post on Ann's Fret Not Yourself blog. I will continue to embroider and embellish this until the moment I have to hand it over. 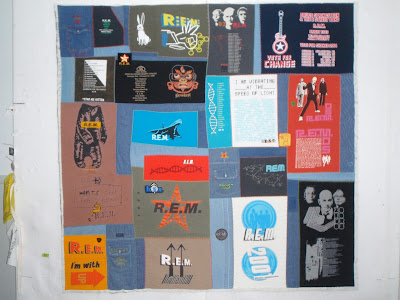 I finished the t-shirt with the large circles for now. I could always add more, but I need to move on. Here is what it looked like before 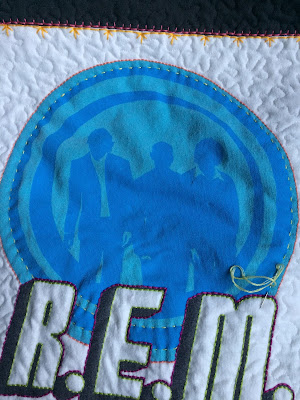 and the after. I had to do some stab stitching in those tight areas which took longer to do, but it looks good. 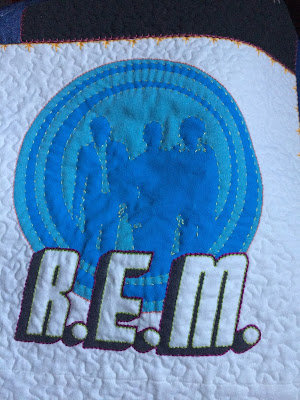 I also made an embellishment for the quilt. There was this thumbs up on the cover artwork in the 2001 fan pack and I thought it would be a fun addition to the quilt. I had some scraps of ultrasuede and some heat and bond so it was a easy project. 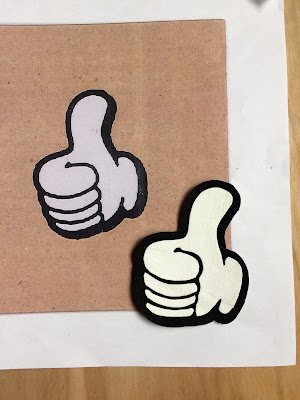 I learned how to do this and had the scraps from when I worked at a shop that made custom clothes for people who showed Western horses. I started out doing alterations then moved into making chaps using lamb leather, lamb jackets, and jackets made using polyester twill. The jackets were decorated with ultrasuede designs and Swarovski crystals. I learned by watching. We had women that drew the designs on the heat and bond and ironed it to the ultrasuede. Then another group of worker's job was to hand cut all the ultrasuede designs out. Other women iron the designs on the jackets and other women outlined stitched the designs on the jackets. The jacket parts would be passed on to a sewer to assemble the jacket, and finally the stoners - yes, we called them stoners, would glue on the crystals. It was quite a process. I made all the leather jackets the last 6 months I was there. Here are a few that I made. 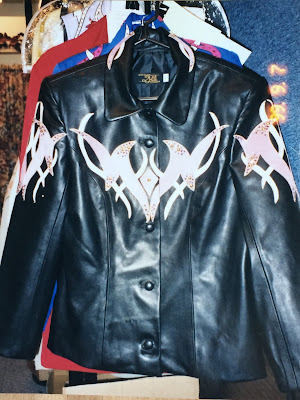 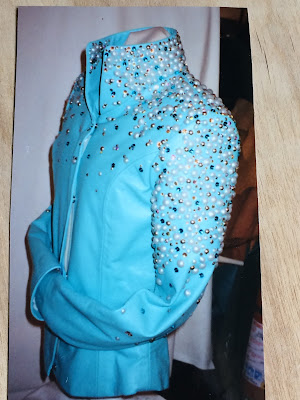 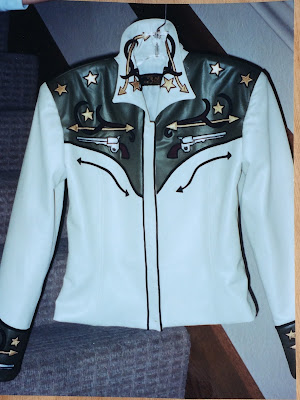 I won't be getting in my 3 hours of stitching tonight. The weather has cooled off a bit and I need to mow.

Love the thumbs up additions. Clever to use ultra suede. It adds such depth to the colors and texture. I'm glad you stab-stitched the circles. I do that by machine. As you wrote, a pain but definitely worth the effort. Congratulations again on making the cut into the art show. Especially wonderful that it's local- so much easier to transport the quilt and then you can easily view the show.
Thanks for linking with AHIQ.

Sewing on leather doesn't sound like a fun job. I guess once you got used to it it wouldn't be so bad.

I mowed this morning while we had comfortable temperatures and a nice breeze.

I love it! You are so super interesting. Your work is amazing.....

I am enjoying all the close ups as you work on each shirt, but the shot of the whole quilt reminds me how great the whole looks. I especially like how you have used the denim fillers so that some parts are almost floating.

Really great improv work.
Sewing and embellishing leather jackets, wow!
Now that would get you hustling and thinking on your feet.
Thanks for sharing.

With all that training and experience, no wonder your Improv is turning out so well. It has a unique quality that you usually don't see in teeshirt Quilts. A real winner, and so personal.