At least no one died

My nephew and his band had a gig Friday night. I got to the venue, about 5 miles from where I work, about 4:30. The band was set up in an open sided gazebo, the power was run to the sound board, and my SIL had the merchandise booth pretty well set up. We kept watching the sky as rain was possible. Well, at 6:30, a half hour before the band was suppose to start playing, it started to rain. At first is was coming straight down - not a problem. But then it started raining harder and harder. The sidewalks were starting to flood and the water was coming into my shoes.
My SIL and I covered the merch table and my brother covered the sound board with plastic 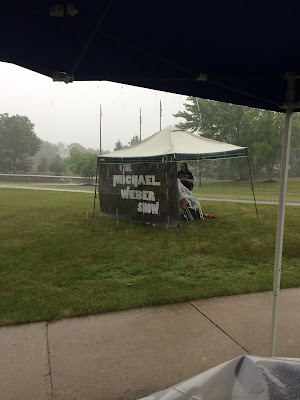 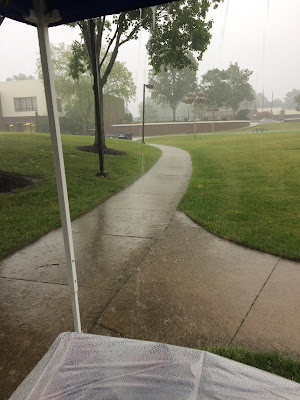 Then all hell broke loose. The wind stated blowing and the rain became horizontal. The rain was blowing so hard it was hurting my face. My SIL and I were holding the plastic on the table and the cover on the t-shirt case when the cover blew off the tent. SO there we were with a driving rain pounding down on us. My brother ran over and we managed to get the cover back on the tent. It was like being in a car wash! Thank goodness there were a couple people that came to the show early and they kept the plastic on the sound board. That tent got damaged and the frame buckled under the stress of the winds and rain. Here is shot of what the storm looked like. 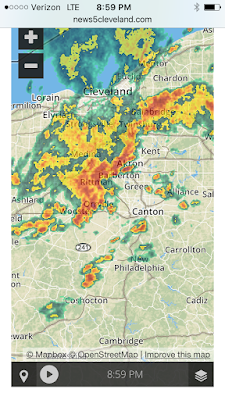 The rained stopped and we all stood around and looked at each other in disbelief of what had happened. I couldn't even get my phone out to take pictures, because I was drenched and couldn't believe what we had just been thru. We regrouped and with the help of a few more people that showed up for the show, we began to pack everything up. There was no way we were going to plug in any of the equipment and there was another band of rain coming. My brother took the equipment over to the drummer's house and they took everything out to dry it off and let it air out in their three car garage. What a mess. My brother called me the next day and all we could agree on is at least nobody got killed - yes, that the best thing that came out of this. We were so lucky that there was no lighting.

I spent Saturday and Sunday stitching on the R.E.M. quilt. I have two more shirts/blocks to stitch the borders. Here is what I got done: 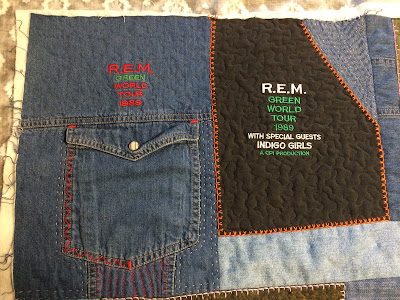 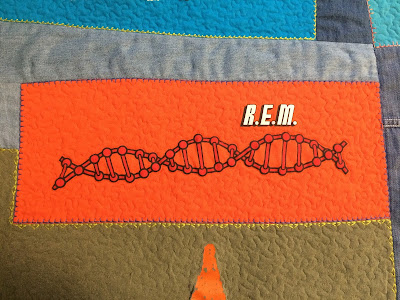 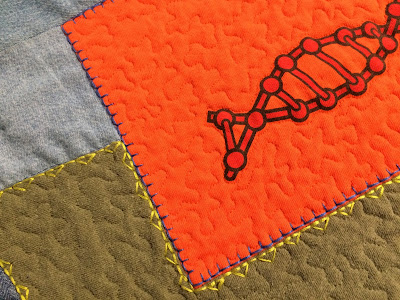 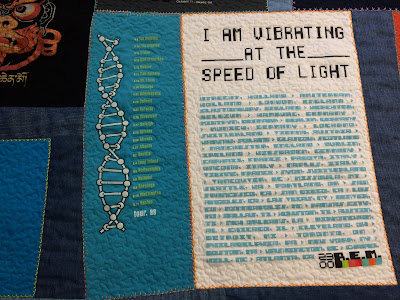 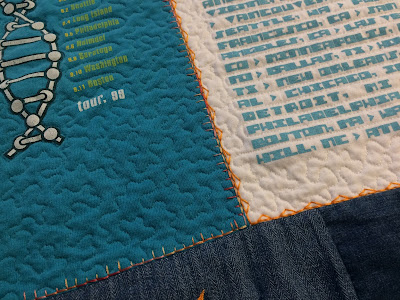 I still have to finish up that pocket, but I have to get my submission in by the 10th so that is the next thing on my list. So you know what I will be doing on the 4th! I now have entertainment while I stitch for the next three weeks since the Tour de France started Saturday. Go Peter Sagan!

I'm glad no one got hurt and that you were able to keep the plastic over most things. The radar looks pretty wicked!

You made good progress on your outlining. I hope you get a lot done on it tomorrow.

What? No dead squirrel?

It makes a good story, at least. I've not followed the Tour de France, but caught a bit in the last couple of days - it's rather exciting, isn't it?