I was off yesterday because of the snow. There was a foot of snow in the cul-sa-sac from Saturday and Sunday's storms or should I say weather events (ugh - fancy weatherman talk! LOL!!). I shoveled for over an hour on Saturday evening with my neighbor lady helping me out a bit and I helped her out. We did spend some time catching up since we hadn't talked since the fall. Sunday I got up to shovel more and there was an 18" drift in the front of my garage door 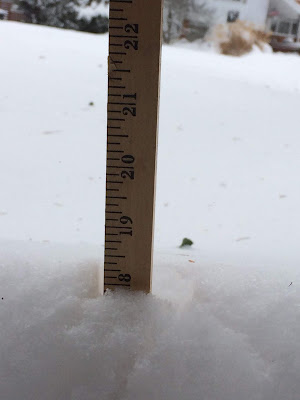 This is the view from my sewing studio 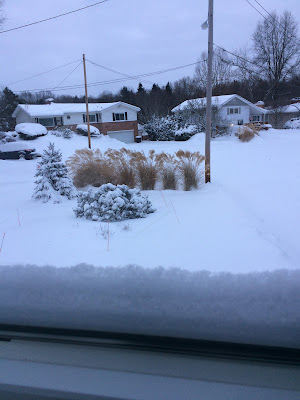 Another neighbor that is next door and I were out shoveling on Sunday and he got the area cleared out into the street between out drives. The snow plows still hadn't come so I called my boss and told her on Sunday night I probably wouldn't make to work on Monday. I went to bed early on Sunday night because I was so tired from shoveling another 4 - 5 inches of snow. I was up by six and looked out front. My next door neighbor was stuck in the snow. I got dressed and went out to help him dig out. The snow was packed under the car. We got it all dug out and cleared a path to his house. We had to rock the car back and forth and with him pushing we got the car out and back into the garage. My house is the tan one. 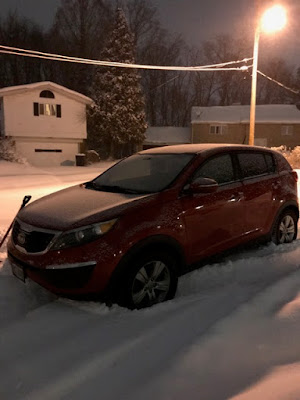 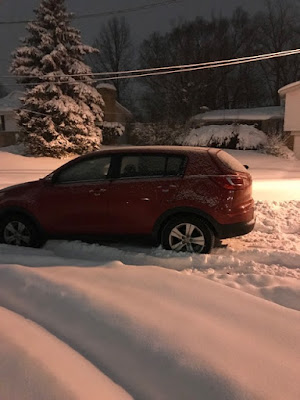 Later Monday afternoon I saw Dave out clearing at path down the cul-da-sac so he could get out today. I went out later and walked to the cross street shoveling the snow to clean the path also. The streets are so bad in town they had to close school today. The town that shares the border - well their streets are fine! I don't know what the plow guys had been doing, but I am willing to bet they won't do my street until at least Thursday. Here you can just see the path Dave and I made. 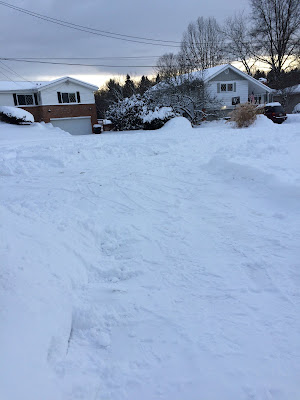 After I would rest after shoveling I did get a little bit done on Sammy's quilt. I am now 65% done. Inside the blue square is what is left to quilt. 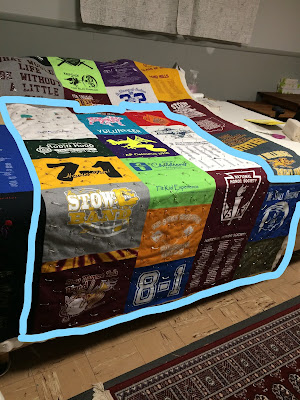 It was hard to move that quilt under the needle with as sore as my shoulders are from shoveling. I am still feeling it today!

Well you've certainly got in your exercise for the week!

I'd forgotten about shoveling snow and waiting for the plows. Funny how that happens. It sounds like a good week to stay in and quilt.

Oh my gosh~! 18 inches! Shoveling all that snow is so Aerobic! You will have "Arnold" Muscles!

You sure got a lot of snow. We are iced in right now.