The papers have been signed!

My appointment to sign the papers for the refy was suppose to be at 1 p.m. yesterday, but the paperwork was slow getting to the title people and the appointment was delayed until 5. The problem with this was that they were suppose to met me at my office, but instead we switched it to my house since we were not meeting until 5 and the house was a wreck! I left work a few minutes early so I could attacked the kitchen. I had to clean off the kitchen table and the countertops. Let's just say I haven't done the dishes in a few days. Now where do I put the stuff? I know the oven! I packed as much as I could into the oven, then stuffed some stuff in the cupboards. If I had run out of room the fridge would have been next! I just got the countertops wiped off when the fellow showed up. The signing went quick and smooth. The notary was a very nice fellow and very professional. This long drug out process is now over! YEAH! I feel free and like I have my life back except now I need to find all those dirty dishes I have squirrled everywhere!

I ran thru two more bobbins last evening working on the Buffet inspired baby quilt. It is coming along quickly! I think I will have this done this weekend. I think that shark fabric is so cool! 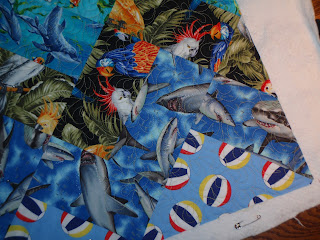 I picked up a couple more Holloween fabrics for the quilt that I am making my brother. I need to get the top made so I can quilt it during the June Quilting throw down Glen of Quilts and Dogs is having. I love the dancing skeletons! 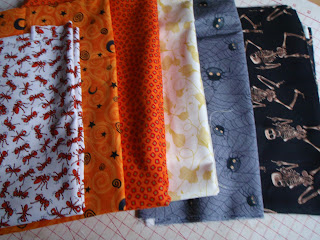 Tonight one of my goals is to get this workbench and all these tools moved so I can get to the window in the bedroom. I had set up this area while Mike and I were working on the bathroom. Last night it was very warm and I opened the other window that faces the neighbor's house, but my neighbor was outside talking on his cell phone several times between 1 and 3 in the morning and woke me up. The window in the picture faces the backyard so if I open it and close the other window which faces the neighbor's house maybe he will not wake me up. 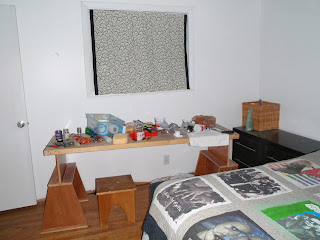 Congratulations! We have had our windows open for 2 nights. It's been wonderful. With a snoring hubby I have to use ear plugs so I miss the sounds of the river and nature. I'm lucky not to have chatty neighbors.

YEAH!!!!!!! Papers signed! I hope you had a bottle of champagne to celebrate.

That is hysterical about putting the dishes into the oven and fridge! I would love to be a fly on your walls sometimes.

What pattern are you using for the halloween quilt?