I had one crazy busy weekend. Saturday I had to drive to Dover to the credit union to sign the paperwork to refinance my car. By the time I got back home I did have much time to do anything as I had to get ready to go down to the award ceremony for the High Art Prize. 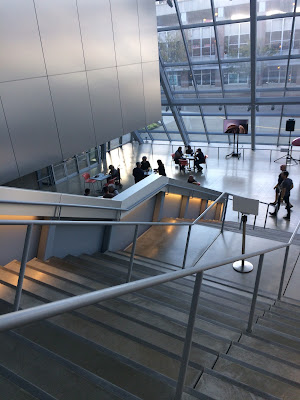 The winner of visual arts - the carved stick by the same guy who won in 2015. I guess he recruited his fellow church member to vote for him again. Let's just say I am not the only person that was disgusted by this. I think they need to revise this rule:

As far as I can tell, unless someone at the High Arts Prize decides he has broke this rule: •The High Arts Festival may disqualify any Entry if it determines, in its sole discretion, that (ii) an Artist acts in a manner that is not fair or equitable - I guess they are stuck with a guy that will be the first place winner of $5,000 if he is entered.

I noticed that the amount of professional pieces was a lot less than what I have seen in past years and I think this is due to the stick fellow's actions. Many artists including the students from the local college, don't have the amount of people needed be to recruited to ever win this event. I believe this fellow's actions have shown a lack of integrity, fairness, and a disregard for the spirit that the event was designed.

I know going into this event that what I do will never win and I am fine with that. I just think it is so sad that there was work that artist's had entered that was deserving to win more than the carved stick.

Sunday I had two tote bags I need to make to hold birthday presents. Of course I forgot to take pictures of them. They turned out so cute. I then got ready and headed over to pick up my R.E.M., picked up my SIL, then headed to a birthday lunch at one of those places where the fellow cooks your meal on a flat top. It was a lot of fun as the chef would toss rice for you to catch in your mouth and squirt sake in your mouth. The food was so good.

Once I finally got back home I sat and quilted on the linen quilt waiting for the ballgame to come on. I am 90% done with it. 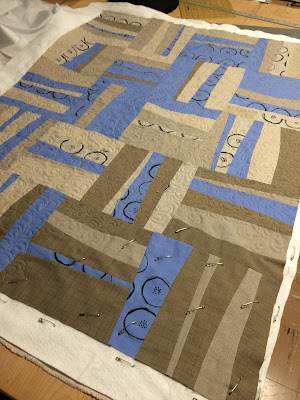 I can understand your feelings. Every year at our quilt show it is always the same 3 people who win.

I hate contests like that. It seems to be the way every art contest on the web is won. It's all about how many followers the artists has and not about the art. Are you planning one for next year? You are creating a great series that should be exhibited in the Rock and Roll HOF.... IMHO.

I don't know what is worse, someone recruiting votes in a popularity contest or a judge who doesn't really know much about art and just chooses their personal favorite. There has to be a fair way to pick the winner.

That seems a shame -if they don't work out something better they will end up without enough entrants to make a decent show.