In today's epic battle with the snow - woman won! Gear needed to fight such a battle includes: Yak Trax (these are rubber and wire - they go on the soles of my boots and keep me from slipping), boots, gloves, polar fleece ear warmers, my son's ND Starter jacket he had when he was in high school, my Road ID in case I keel over dead so they can identify the remains when they find them in the spring, my cell phone, and a shovel. Let the battle begin!


There was 3" when I got to the house after work which equaled 45 minutes of shoveling. This morning there was another 3" so more shoveling. The good news was that the snow was so light and fluffy that as soon as you started moving it around, it just collasped. I was so tired last night that I did not get started on pinning together the xmas quilt. 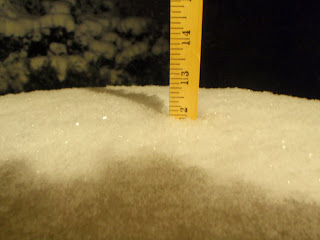 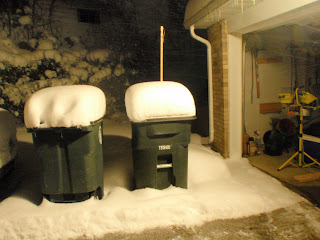 I know a foot of snow is no big deal for a lot of you out there, but it is causing quite a mess northern Ohio. The streets are bad!
Posted by patty a. at Tuesday, December 07, 2010

According to the weather geek that I married, I think you are going to see lots more for Christmas! I wish we had it.

I am not looking forward to winter.

Somebody just showed me the Yak Trax. I think I need to get some.