I am now at 53% done with the quilting on the B&W quilt. I really had to force myself to get that white border done. I was getting bored quilting it. So the white border is all quilted and I do have the white triangles on one side of the outer triangle border quilted. 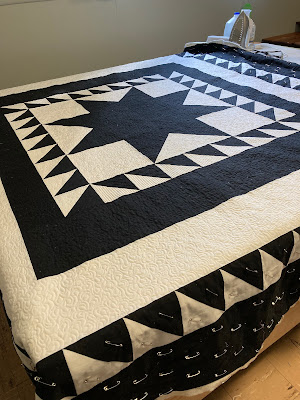 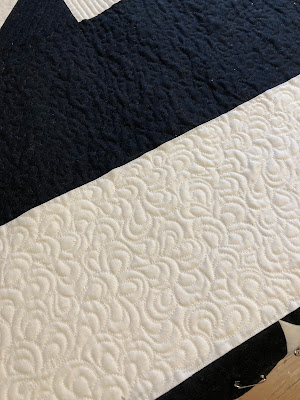 Thursday night I worked on taking more of the deck down. Those boards are long and heavy. The good news is that the majority of the nails were rusted and the boards were not even attached to the joists! All I had to do was scoot the boards to the end of the deck and flip them off. Here is where I was and where I am right now. 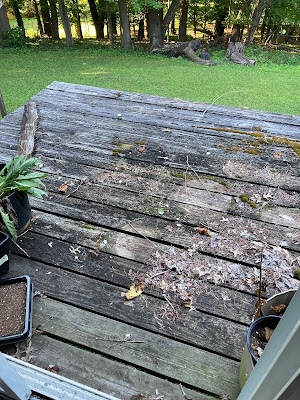 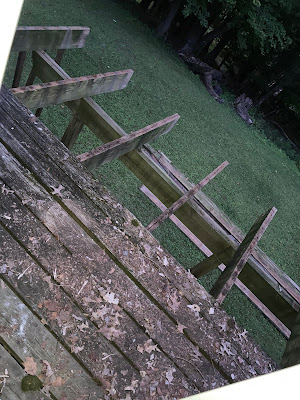 After that pulled 15 gallons of weeds and moved some of the bricks for the gutter guys that were coming on Friday. This pile needed moved and the area cleaned up so it would be easier for the guys to do their work. I finished moving the bricks Friday morning. Here is a shot of new location for the bricks and where the bricks were up by the garage. 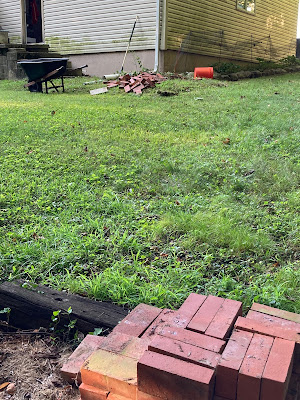 Here is some of the mess where the bricks were located and how it looks now. Much better! 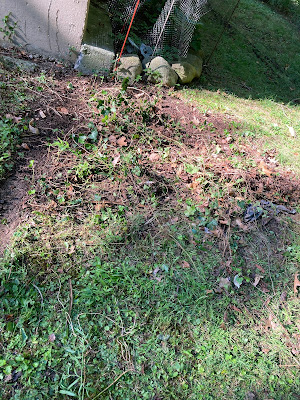 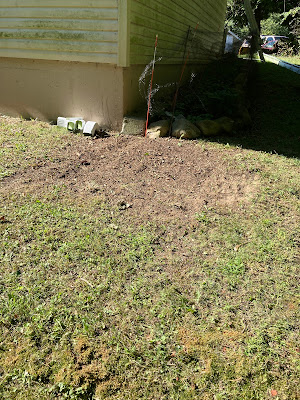 The guys arrived about 8:45. I helped them a bit cleaning up the old gutters and gathering up the gutter brushes that I had installed. I gifted the gutter brushes to my neighbor. About two hours later they were done. I also saved some of the downspout for my son. He has a missing downspout and needs extensions on several of his downspouts. Now I just need it to rain so I can see how my new gutters work! 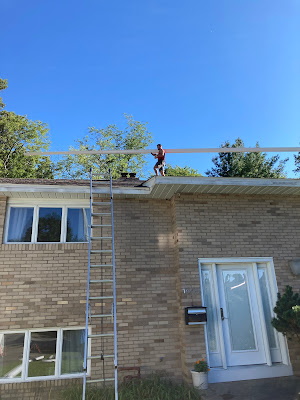 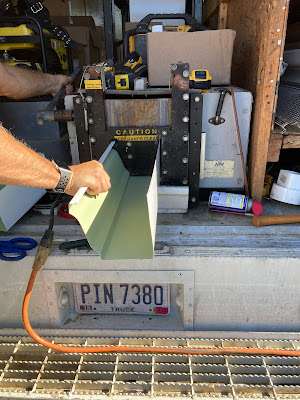 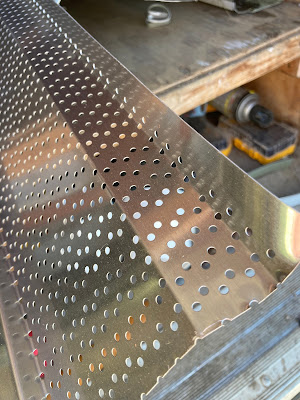 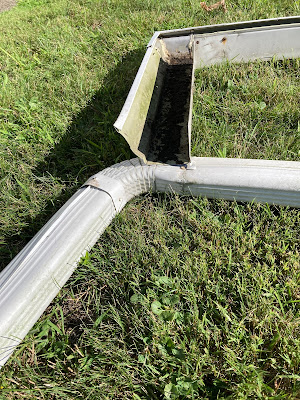 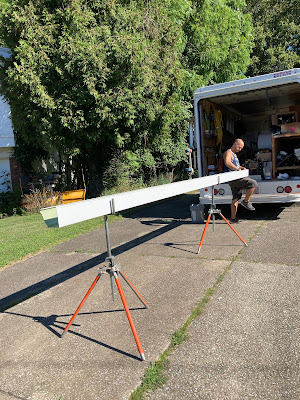 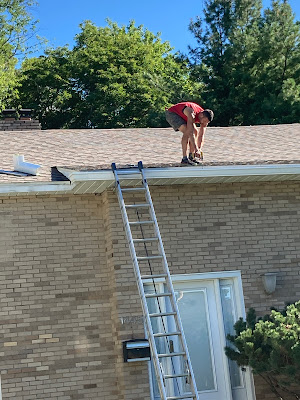 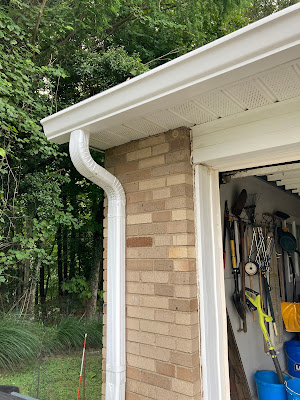 I spent Saturday with my son and his girls. We went to Sugarcreek for brunch, stopped at the bulk food store, stopped at a fabric store where bought some quilting thread - 2 black, 1 dark gray and 1 dark navy 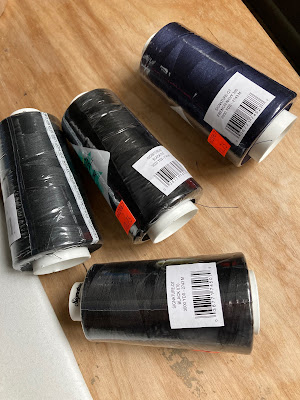 I bought a piece of blue and white plaid fabric to go with the fabric Cherie sent me for the back of that vintage plaid rail fence quilt top. 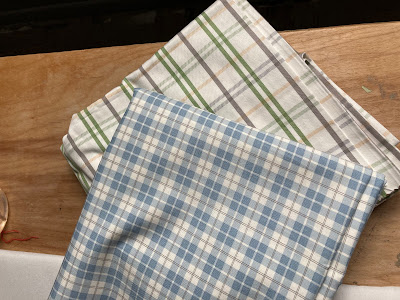 We then headed to Chestnut Ridge Sewing Center so I could drop off my scissors to be sharpened and hit a flea market. I bought a nice bamboo cutting board for seven bucks! I headed back home and crashed. I spend most of Sunday finishing up laundry and quilting. I did pull another 5 gallons of weeds and watered my marigolds. I forgot to take a picture. They have really gotten big in just three weeks! My sister opened her birthday present so now I can show you what I stitched for her 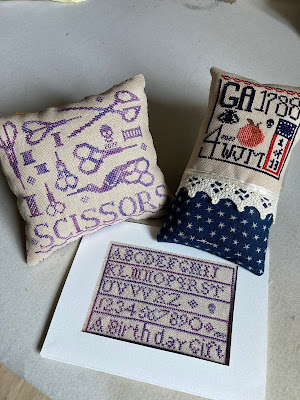 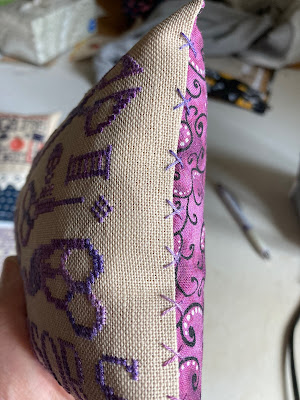 I finished stitching the red SCISSORS small; this is for me. 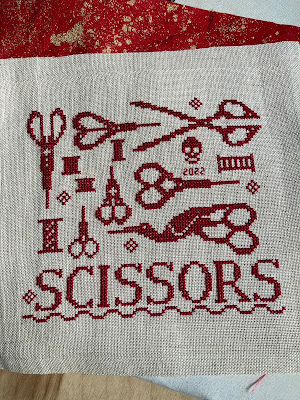 I have started another small to send to Cherie for sending me the fabric. I had asked her what I could do for her in return for the fabric and she said she would like one of my smalls, but I had to stitch a skull on it! LOL!! I will show you all that small once Cherie receives it. I'm tired.
Posted by patty a. at Monday, August 15, 2022

What a busy weekend. I'm glad you are seeing progress on the black and white quilt. That is the problem with large areas of solid fabric, it does get boring to quilt. It's going to be a nice quilt when finished though.

No rain predicted here until next weekend so I'm not sure if you will have any sooner than that.

Yes, large areas of solid fabrics are just like how I feel about the desert where I grew up…..boring! Yes, thee must be a skull ;)