My friend arrived late Saturday afternoon. After we ate the pizza I had made from scratch, she handed me the bag fabric she had bought for me. She had texted me when she had run into the motherload of Australian fabric at Zink's in Berlin, Ohio. Many texts later and a couple hours of going thru the stacks of flat folds, this is what I bought with her help. I hadn't figured out how many yards or what I am going to make, but at $5.00 a yard for first quality M+S fabrics, what a score! 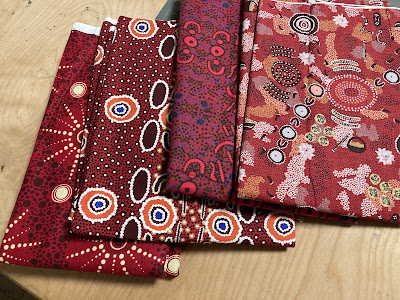 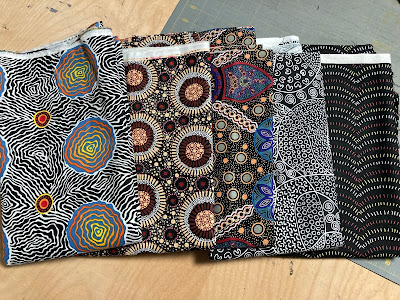 Friday night after work I stopped and picked up a box spring for the one twin bed in the guest room. The beds were made with freshly laundered sheets and quilts were added. I was happy that the odds and ends quilt fit the bed so well.  My friend had a cozy place to sleep.  I did get a lot of the stuff that was piled up at the other end of the room moved out.  Some I relocated and some will be removed from the premise by either donation or trashed. 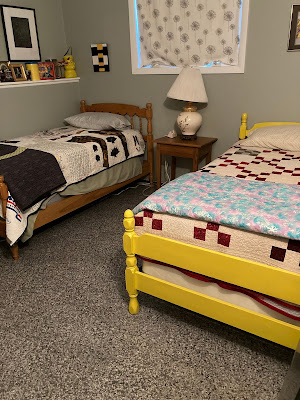 I spent the rest of Friday night and most of Saturday cleaning and making a quick trip to the grocery store for things I needed to make meals for us. I was happy to get so much done especially tasks that I had been meaning to do and just didn't make time. I had 10,000 steps in by 3 in the afternoon!  Nothing like having company to get a person cleaning their house! LOL!!! My friend brought me flowers! So that is the second time in two weeks someone has brought me flowers! I took the bouquet and added them to the previous ones after cleaning out the dying flowers. So pretty! 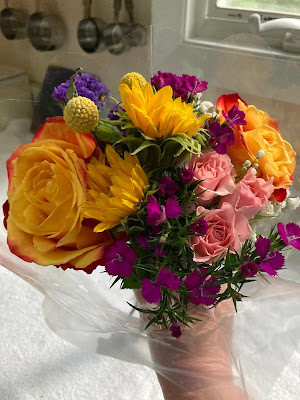 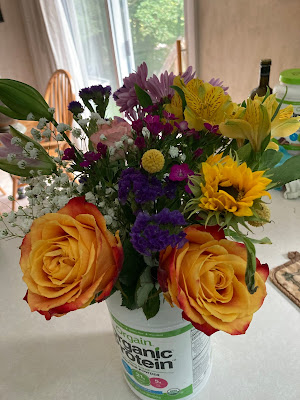 I didn't get much sewing done Saturday night; I was pretty tired after all the cleaning. We stayed up until 11 then called it a day. Sunday after breakfast we made a quick trip to a local produce market and greenhouse. I wanted to get some peaches. I cut up two for lunch today and they were so juicy I had a hard time holding on to them.  The peaches are as big as baseballs! 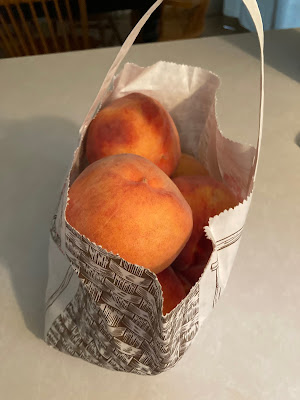 We walked around the greenhouses and my friend found a prayer plant. We also brought home this jade plant. Here it is replanted. I don't know how it was even alive. It was in a teensy tiny pot and the dirt was like concrete! I hope it is much happier in my north facing bathroom window. 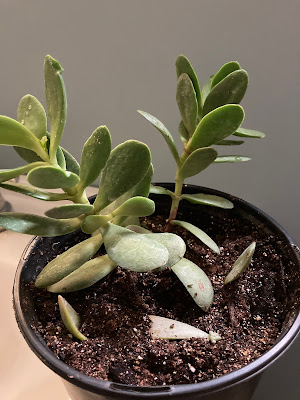 My brother called me Sunday and he needed my help with two more sewing projects for the band he is touring with. First, he needed a pedal board cover. A pedal board is that device that sits on the floor in front of a guitar player and they can push on different pedals to make different sounds on the guitar. Then he needs a cover for the drums and the keyboards when the equipment is set up on stage before a concert to keep the dust off the equipment. Eight California king sheets are showing up at my door today. I need to sew them together in two sets of four. He also wanted a bag to keep them in when they are not in use. I already had a big bag I made years ago to haul quilts in so I will just give him that one. So tonight I will be sewing those sheets together and get them in the mail. They need to be in Texas by Friday. Here is the pedal board cover and the bag. 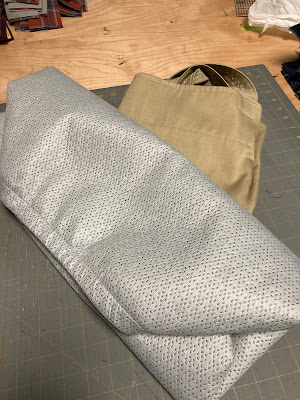 I did get a few flannel strips press and subcut into pieces for blocks. Pressing all those strip sets and cutting them is going to take a while! 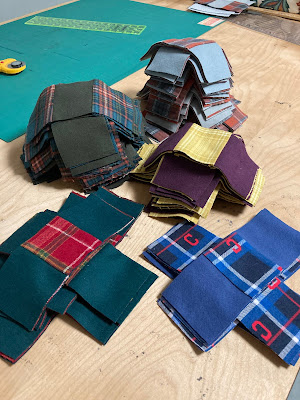 Finally, here is my progress on the deer cushion cover - first where I was last Monday and where I am now 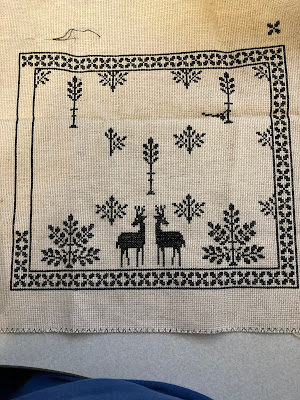 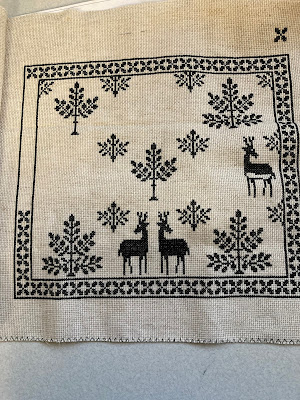 What great Australian fabrics. I can’t wait to see what you do with them. I have about half a dozen and haven’t been able to settle on anything yet.

Great progress on all your endeavors.

That was a wonderful bargain on the M&S fabrics. You got a nice selection of colors and values too.

I just saw your post on folding the sheets and taking the box to the post office! You are a good sister!!!! But I'm sure your brother already knows that!

What a great bargain on the fabric and your guest room looks really comfortable and welcoming.