It has been a crazy week. I may have electricity in the job site trailer a bit longer than I thought. All the electrical crews are in Texas or Florida helping out to restore power so there are no crews to remove the drop pole where my electricity comes from. I heard on the news last night that the crews are ahead of schedule restoring power in Florida - that is a great thing!

I stopped at the bulk food store which is an hour and 15 minutes away from where I live, to stock up on supplies for baking cookies and pecan pies for xmas. I was at the dentist in the town where I use to live so I figure I might as well stop at the bulk food store. Here is my haul - pecans, almonds, organic raisins, organic oatmeal, brown sugar, a block of chocolate, powdered sugar, and cumin. 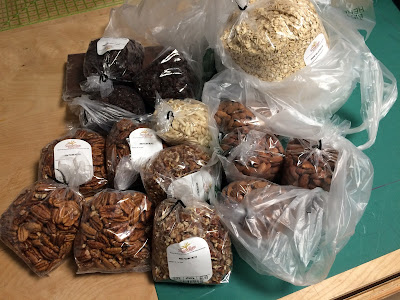 By the time I got home I was tired and it was around 5:30. I unloaded the car and got ready to watch the Indians. They showed a picture of the crowd trying to get in the ballpark. This was the middle of the second inning. The lines were at least a block long. 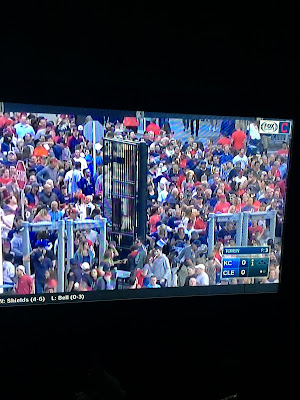 Last night was win 22 in a row! Tonight is the opening of the High Art Prize so I think I will go for a little bit, but I want to get home to see tonight's game and I have to spend some time at work tomorrow. The asphalt guys are starting tomorrow so I have to be there to take some pictures.

This morning I went around the job site and passed out stickers to the contractor's workers. They put them on their hard hats and the stickers put a smile on everyone's face - even the grumpy guys. I have had these sticker for probably more than 15 years. It was time to break them out! 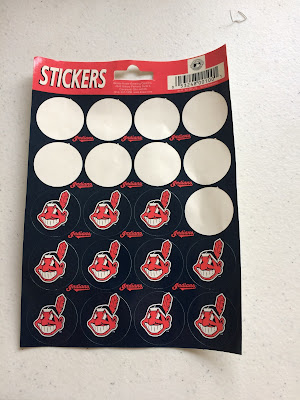 Those Cleveland Indians are having a great run!

I was just thinking yesterday that I needed to start planning (and working on) my Christmas postcards. How did we get here so fast?
At least you have containers for your cookies!

Watching the Indians win streak is so exciting, even though I root for the Giants. Love the stickers and clever of you to hand them out to the workers.
I need to make Christmas stockings. Have the fabric but haven't done anything else yet.

I'm impressed by your advance planning - I think about that stuff but am not so good at getting round to it. Hope you did go to the viewing last night and that it was enjoyable.