I have a clamp swing arm lamp over my sewing machine and it had issues. The switch to turn it on and off didn't work and the clamp that the lamp went into was broken. I had tried to glue and tape the clamp back together, but it was on its last leg so I got a new lamp.
Old lamp 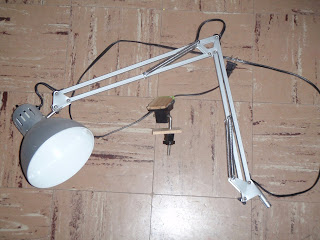 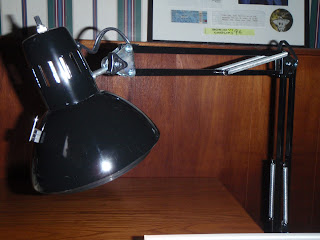 A new project I have is to make a small quilt for a young fellow, Justin, who works at the museum and will be graduating with his masters this fall. He is quite talented. He has designed and constructed clothing and he done illustrations for several published books. We have such a strong connection with our love of sewing and the arts. He auditioned for Project Runway several years ago and Mondo wanted him on the show, but he did not get picked. I think that was a good thing, because he is such a sweet person if there were a bunch of cut throat designers in his group they would have broke him. Justin gathered up a bunch of his favorite clothing items he can no longer wear and some scraps of fabric from clothes he made and I am going to make him his quilt with these. He is leaving it up to me as the artist - that always cracks me up when he says that. I guess because what I do comes so easy to me so it doesn't seem like it is that special to be called art. Well, here is a picture of his items up on the design wall. Now I just need to get to work. I may have to hand quilt this one since some of the fabric has polyester in it. Free motion quilting and polyester don't mix at least on my sewing machine, but I could always just do regular stitching. It may be a combination of both - who knows at this point! 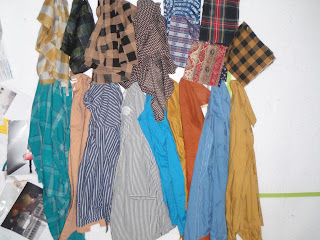 You shouldn't have a problem quilting through polyester with your machine. Maybe just a different style needle is needed. If he has seen some of your quilts and likes them you will be sure to please him with his custom quilt.

Oh that will be a great quilt. I love the colors!

Good luck with your new project. And I need a light like yours in my den!

Daughter Carrie went to school with the guy who won....I think it was last year. They would get together and watch the show with all their friends each week.

It was really exciting when he won!