I tried, I really tried to quilt last evening, but it didn't happen and here is why. The A/C wasn't working properly and I had to call one of my brothers to get some advice. I had checked the breaker and filter then went outside to look at the compressor. I hosed it down to clean any dirt or debris off the fins, but the fan blade was not turning and it was making a humming sound. My brother told me who to call. I was third on the list, but I didn't care. I wasn't going anywhere and the upstairs was over 80 degrees. I then had to clean up the house a bit before the repairman showed up - laundry where he was going to have to walk, a bit of vacuuming, and what is that smell? Now remember I haven't had time to do much housekeeping as I have been doing nothing for weeks except getting projects with deadline done.

Meantime my sister was texting me and another brother called. The repairman showed up so I was juggling my phone call with the repairman and he was cool with that. The repairman figured out what was wrong in two minutes! It was the capacitor. It is the round thing hanging down with the rust on it. 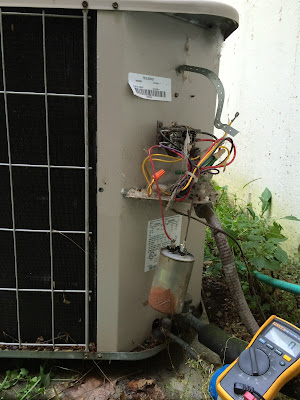 The repairman checked the temperature after he got things running and I have A/C again!

By the time I hung the phone up with my brother, I had to call my other brother back to tell him what the problem with the A/C was. Ok, it is now 8:00 p.m., I am soaked in perspiration, and getting tired since I had been up since 4:45 p.m. No quilting was going to happen, but I did quilt before I had gone to work in the morning and at lunch so I did have something to show for my efforts for the day. I made a spread sheet so I could keep track of my progress and I am now 42.8% done quilting. Here is a picture of part of the back. It is navy flannel (yes, it looks purple in the picture!) and looks kind of cool with the quilting outlining the lettering and motifs of the shirts. 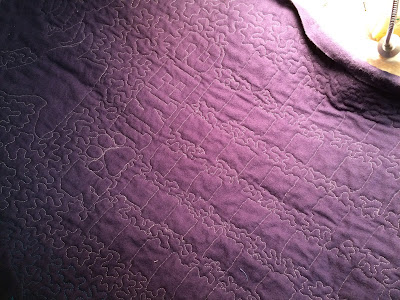 I need to go and get a new battery for my watch as it has stopped, but I don't want to spend the time to do that. Today I need to really focus on getting as much done on the quilt as possible to try and make up for last evening.
Posted by patty a. at Tuesday, September 01, 2015

I think it's impossible to work when it's too hot. Glad yours is working again!

I do love the back. In fact, if it were mine, I'd put that side up.

Ohhh! I hate losing the A/C! Worse than a root canal! glad it is back up.

You are doing a great job on the t-shirt quilt. I wonder what I should tell the girl I will charge her.........ideas? I have been thinking about it.