This weekend blew by because I was so busy! Saturday morning was all about getting my hair cut, stopping by a couple of grocery stores and attending a event called Urban Elf where Justin had a booth. I hung around for an hour but Justin never showed up so I didn't get to see him. Here are some pictures of his booth. 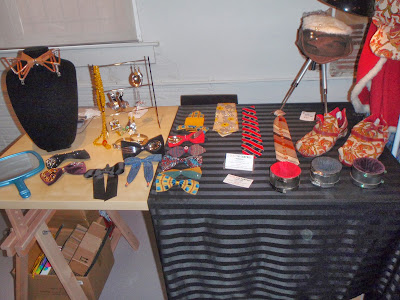 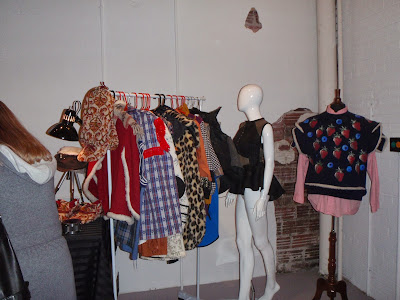 By the time I got home it was after 1 p.m. I needed to get to work on the musical quilt and so I did. I managed to get the top finished. I used the trimming from the blocks to add the row at the bottom and the piece at the right side of the red triangle section. 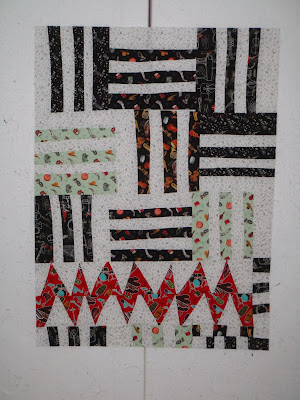 Sunday morning I made lasagna and a banana cake to take to my son's. When I got back home it was 5:15 and I called one of the women in my MQG, Stephanie, that wanted to use my table to pin baste a quilt she wanted to get done for Xmas. Look at this quilt. Isn't it fabulous? She was at my improv demo I had last year for my MQG. What a good student - great job grasshopper! While we pinned we talked about having the same fears when working this way - not having enough fabric, will it turn out like I picture it, etc. She also said how she thought it took more time to make with all the decisions you need to make. This true, but the results! She said she was influenced by a quilt someone else had made and the quilt was suppose to represent DNA strands. Hey, we are all influenced by everything we see. It is a matter of finding a way to make it your own and I think she was very successful. 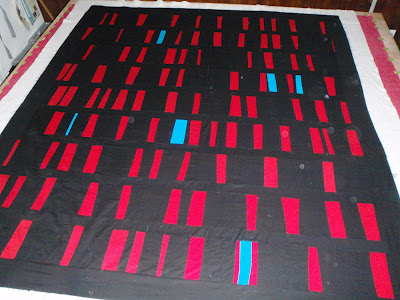 See the black sections are pieced too! 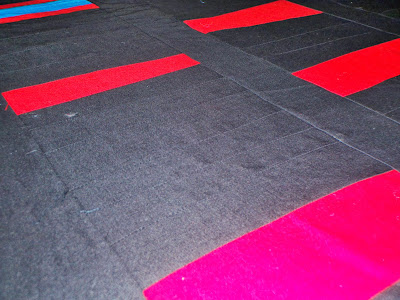 Look what Stephanie brought me - a mini zucchini bread and some home made mocha truffles! Yum! 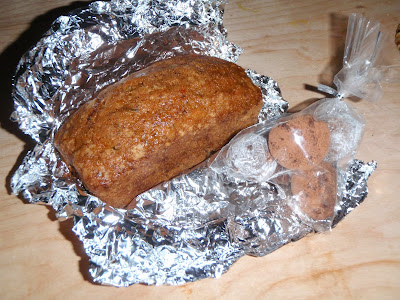 After she left, I pin basted the musical quilt and between last night and this morning before work I got two blocks quilted. The fabric I picked for the back is not a favorite of mine, but it was priced very good and it was musical fabric so I bought it. In the process of making these improv quilts using novelty fabrics I have learned that high contract leads to a more sophisticated look so I use very little medium fabrics. Now I did use that light green in the musical quilt since it had drums on it, but I think a little bit works in this piece. Since I was going to quilt the musical quilt with thread that matches each fabric, I thought this light gold fabric would work on the back and the different colors of thread would make the back more interesting. 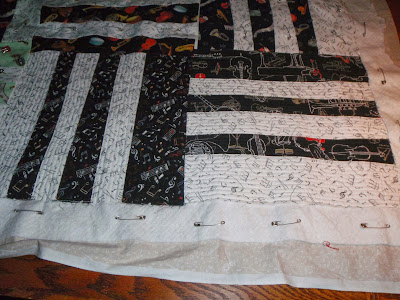 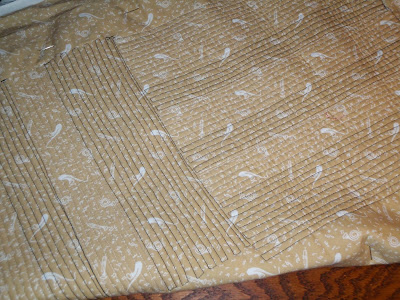 I am having way too much fun making this quilt. I think I have finally hit my stride and found my voice.
Posted by patty a. at Monday, December 09, 2013

The musical quilt looks great. The addition at the bottom and right are perfect!

I love both quilts!

Let's see a post of your greatest hits in improv, to see how this voice came into its stride.......!