I first have to say how lucky I am - I still have electricity and the ice was not as bad as predicted. The roads into work today were better than yesterday. The cul-de-sac I live on is another story. I couldn't make it up the slight grade the first time, or the second, or the third. I would make it so far then I would have to back up 5 or 6 feet and try again. I slowly inched up and made it to the flat circle about the sixth try while my neighbor, who was outside watched me! All I needed was a little push and I would have easily gotten up the grade. He had gotten stuck there in the morning on his way to work. He said "Oh, it looked like you would make it eventually." I was so pissed! I wanted to say "How would you feel if it was a family member of yours and that someone just watched them struggle when you could have helped?!" After I got to the house, I got the shovel and proceeded to walk back to the spot that gave me trouble and started to shovel the street while I was swearing at the city of Akron, Ohio for not touching the street for the last 3 weeks. I started sliding around this morning (the snow and yuck must be at least 6" deep) when I was coming down the grade this morning, but I made it ok. It is hard to get a good photo of ice, but here is the driveway and the ice covered snow. The ice had already started to melt because the temperature is in the low 40's until noon today when it drops into the 20's. 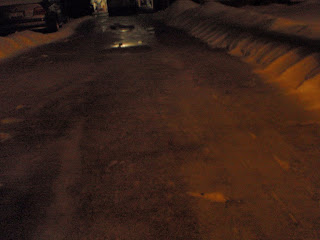 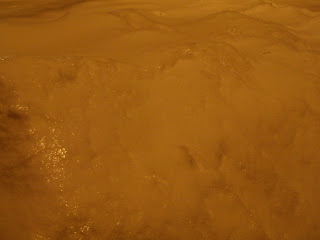 Here I stuck my foot into the snow just to see how thick the ice was - crusty! 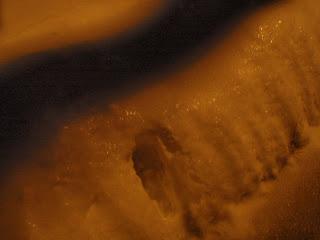 Same story here in Dayton, OH (minus the unhelpful neighbor). Good to stay inside and sew!

I bet you are the only person who tried to get to work today!